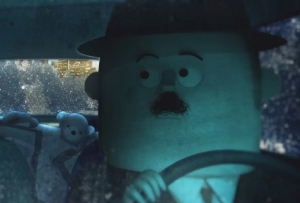 Decca records approached Trunk on behalf of Classic FM to create a film for composer John Rutter’s ‘Angels’ Carol’, one of the most beautiful Christmas carols out there!

Inspired, Rok Predin immediately got to work to create a short that captures the spirit of Christmas and the festive holidays, with driving snow, treacherous roads, and the warmth of strange woodland creatures! His resulting wintery film is based on the classic tale of getting home for Christmas, something we can all relate to as we struggle with trains, planes and automobiles at this time of year.

The story is presented in Rok’s unique handwriting of rich textures, layered depth and a mix of peril and humour. With a nod to Studio Ghibli’s Totoro his uplifting short walks hand in hand with the magnificent building nature of the song!

Rendered in Cinema 4D and After Effects the work owes a lot to the methodology Rok perfected this last year creating his widely acclaimed short ‘One of a Kind’; as Rok states “The fast turnaround of the short would not have been possible without working on ‘One of a Kind’. It also bought back memories of working on ‘Winter Poem’ especially when it came to rendering snowflakes and thinking of the magic creatures contained in wintery woodlands”

Fonic, who collaborated on Trunks previous Christmas Vimeo Staff Pick ‘Thin White Gelato’, once again developed the audio for this year’s festive outing. They’ve had a busy year themselves working on Studio AKA’s new series ‘Hey Duggee’ which has its first ep airing on CBeebies on 16th Dec at 17.25, ‘Ruff Ruff, Tweet and Dave’ for Collingwood and Co which goes out next year, and ‘On Angel Wings’ for Illuminated Films which is on BBC1 on Christmas Eve no less!