Half promo, half explainer video, the film was directed by Dark Energy’s Blok ahead of Thursday’s general election 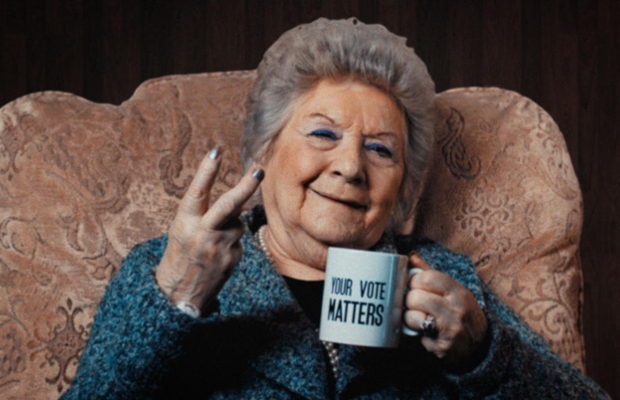 With the UK general election looming, Blok has directed a new music video for Plan B’s topical ‘First Past the Post’ track. The film aims to explain a part of the voting system that few fully understand.
Paul Casey (Blok) comments: “We all know that loads of people think that their vote doesn't count, which in the current system isn't exactly wrong, and we wanted to help Ben get people to know how to play the system a little better, rather than being played by it. We wanted to help discourage apathy, at a time when people are losing faith in the whole political system.”
The film aims to inform and educate people about the complexities of the voting system, in order that they can make an informed decision on December 12th. With his youth appeal, the hope is to mobilise young voters into participating and having their voice heard. Blok had only one week to take the concept through production, post and delivery, whilst juggling numerous other projects alongside.
They comment: “From the off we wanted to get into the promo with some kind of reveal and have Plan B come in and disrupt something. We played with the idea of a ‘fake news’ broadcast that’s about to start and just as the reporter brings the mic to his mouth, the background flicks to green-screen, it falls down and Plan B snatches the mic and speaks the truth to the audience, cutting through the bullshit.
“In such a time where the country’s divided, we wanted to show just how close to home the divide in opinions can be and sit within families, dividing loved ones. Hyperreal worlds and abstract scenarios is something we’re into, so we captured a family arguing over Brexit at the dinner table. They exchange lyrics before tension builds and the table physically breaks in two, symbolising the polarising views of the two generations. This one was drawn from personal experiences, haha...
“To balance out the comical satire, we shot a pretty raw performance element which stitches the whole video together. Supported with animation, Ben performs (mic in hand), as he educates a bunch of young people (and the audience) on the voting system.
“Later on the in the video we see our campaigner character chuck a bunch of campaign leaflets at a teenager in a drive-by propaganda attack. The leaflets rain down on him in slow-mo, as he looks up in confusion. This was a pretty impactful moment for us to capture, as a fair few young people don’t have a clue about the political climate or really care because they can’t vote. It’s important that the next generation get clued up, so we don’t keep falling into the same mess we’re in currently. Hopefully this video can help make a dent in the knowledge gap.”
Richard Jobson (Blok) notes: “I’m not trying to sound like a pretentious wanker, but music has a great way of getting people to ask questions of themselves and the world around them and our voting system is broken. Music has always been massively influenced by politics and we've seen how it affects people's views on it. It has massive political and ideological sway, especially for a mass audience. Some people only read The Sun. Others read The Daily Mail, or The Times, or The Guardian. Everyone listens to music. It's a very instant way of landing an idea or a thought. Corbyn and Labour have utilised the grime vote better than anyone, we've got Stormzy calling out Theresa May, Boris and the Tories, and all of this has massively helped to mobilize the youth vote. It's something that the current government now has to consider - its youth - and it's ignored them for years and years.”
Blok have a history of working directly with artists, with their recent films for Novelist ‘No Weapons’, as well as Meridian Dan ‘Vegan Chat.’
On working with Plan B, Blok comment that: “The fact that he's managed to craft lyrics and an instrumental like this based solely on a voting system is crazy - the track is brilliant aside from it's message! His writing is incredible and it's been amazing to work so closely with such a talented artist as Ben. His eye for detail is outstanding.”
In order to get this done, Blok pulled in any favours they had left... and those that helped are some of their closest friends and colleagues who also believed in the importance of the message. “We'll be forever grateful to everyone that helped to get this over the line,” they conclude. “We really do have a very special team and we love them very much. We owe a lot of people a nice dinner! And probably beers for life…”
Blok are represented by Dark Energy in the UK. To view their reel click here.

A film by Blok