The performances from Nexus Studios and Google’s ARCore Geospatial API, use AR to transform public spaces into cultural experiences 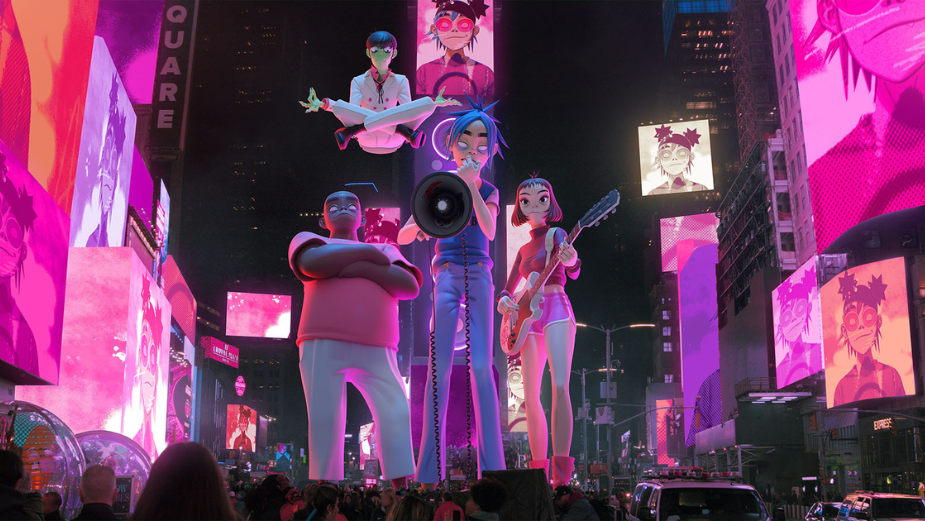 Gorillaz will revolutionise the very concept of musical performance, as they transform the streets of New York and London into stages for two groundbreaking performances of their brand new track ‘Skinny Ape’. Taking place at 14:30 ET on December 17th in Times Square and 14:00 GMT on December 18th in Piccadilly Circus, these first-of-their-kind immersive experiences will allow fans to gather together to witness Gorillaz play in real life - actually larger than life - as Murdoc, 2D, Noodle and Russel literally tower over them, playing in the midst of two of the world’s most iconic skylines.

Directed by artist and Gorillaz co-creator Jamie Hewlett and the Emmy nominated director Fx Goby, the ‘Skinny Ape’ performances are created by Nexus Studios and utilise Google’s ARCore Geospatial API, using AR to transforms public spaces with cultural experiences, bringing ‘Skinny Ape’ and the world of Gorillaz to life as never before.

Music’s most (in)famous virtual bass player Murdoc Niccals commented - “To all our followers, get ready for the biggest Times Square takeover since that other gorilla smashed the place up. Bigger in fact cos there’s four of us. Thanks to the techies at Google, we’ve created the music video event of the century, so don your pink robes and come see Gorillaz like you’ve never seen us before. The future is nigh!”

“We’re always excited when music and entertainment can bust out of the usual to meet fans and tell stories in new places. Working with our friends Gorillaz and Google, this was a perfect opportunity to bring our dual passions of Real-Time animation and immersive tech together. Experiences told on top of cities at this level of visual fidelity are full of exciting promise.” - Chris O’Reilly, co-founder & CCO, Nexus Studios.

OUTFRONT and Ocean Outdoor are at the intersection of immersive experiences which bridge the physical and virtual worlds. Situated in the cultural heart of New York and London’s entertainment districts, Times Square and the Piccadilly Lights are the perfect portals to unveil the music video of the future.