5 Minutes with… Karni and Saul

The filmmaking duo on joining RSA, creating ‘casual fantasy’ and working as a married couple 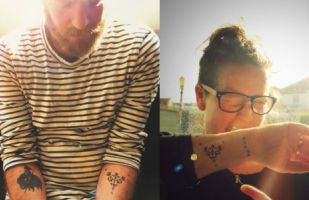 Animation duo Karni and Saul are best known for their ability to blend live-action photography and film with fantastical, otherworldly animation - a technique they’ve dubbed ‘casual fantasy’. Their most recent work is a stunner of a music promo for Katie Melua, in which they create a world out of sugar and gorgeously tell a story of a mother and son entering a magical forest. For a film created out of only white characters, it packs an immense emotional punch.

After a stint with Aardman, the pair - who are also married - have joined the team at RSA. LBB’s Addison Capper caught up with them to find out their plans for this new venture.

LBB> What is it about the crew at RSA that tempted you to join? Why are they a good fit for you?

K&S> They are such a respected and well known company. The work is top notch and creative. The directors they rep are all fantastic… What's to know?

Also we met up with Melody, the EP, Head of Design and Animation, and she took to our work immediately. We had a great inspiring conversation where we saw eye-to-eye on things, dreams and such, and had a laugh and a hug. Always a good way to judge and start a relationship.

LBB> I’ve read that you like to create “casual fantasy” with you work. What do you mean by that?

K&S> When we were nominated for the BAFTA in 2011 for our first short film ‘Turning’, they asked us what our genre was. We came up with "casual fantasy”, as we didn't seem to fit the other boxes. It reflects our use of strong, emotion-driven, beautiful, yet realistic cinematography with a touch of fantasy and animation. It’s more of an approach / philosophy; it's about treating fantasy casually, as we find life quite surreal.

LBB> You have probably been asked this 1,000 times, but how is it working as a married duo? Is there ever any friction or is it more a case of being so comfortable with each other that it’s avoided?

K&S> The great thing about it is that it takes us on an adventure which is truly shared.  Working together mirrors a relationship – like in marriage, we have to talk a lot, compromise and work through things. Of course there is some friction, but nothing good is ever made without some friction. The fact that we are two makes us strong creatively. We are each other's first audience and we aren't afraid to say it like it is, which is key.

We also have kids so we kind of have to make it work! We have seen plenty of duos of friends or brothers break up over ego! We can't afford that.

LBB> When did you decide to start working together?

K&S> In 2004. It was all Karni's fault… Saul was an animator, Karni a photographer and we made some joint films for Nick Knight's Show Studio on an old phone using stop frame and some acrobats... and that was that. Virgin records saw them and thought they had potential and we made our first music video and got signed quite quickly.

LBB> How do you work as a duo? Do you both assume quite specific roles or is it more fluid and natural?

K&S> We each specialise in a field... but more and more we recognise the strength of crossing over. We’ve found that it's really interesting to have a photographer direct animation, and an animator direct live action performance, so we mix and match much more now. We truly enjoy all the different stages of production, so we try and engage with them as needed. Still, animators love Saul's direct, animation-based lingo, and actors love to connect with Karni's extrovert side. So yeah, as fluid and natural as we can get it.

LBB> Your recent promo for Katie Melua is a real beauty. I’ll admit, I’m quite hard to please with sentimental themes, but this got me. What was the inspiration behind the white ‘sugar’ look?

K&S> Thank you! Sumit Bothra, Katie’s Manager at ATC, told us it was a winter album and the visuals needed to relate to this, but not to be too obvious. We came up with a sugar world, something we’ve always wanted to do, and felt it would look like winter and snow, but not be the actual thing.

Sugar has a rough beautiful texture and we loved how fragile and strong it can look. Just like icicles. Substance is extremely important to us, we believe that beyond a story, emotion comes from material, imperfections and texture. How light travels through things.

We can relate to a piece more that way, as we have imperfections as humans... we call it "perfect imperfections".

LBB> It’s amazing how much personality and emotion there is in the whole thing, considering it’s 95% white with little facial expression. How did you manage that?

K&S> Well again it's all about material. It’s about having some rough emotional imperfections, the way that we treat movement and a story that has a basic human emotion, like danger and overcoming it, or mother and son being separated, going on a journey.

Our character design philosophy is that less is more. What you don't show, the viewer will fill in with their own mind – actively engaging, and then feeling.

LBB> And with regards to techniques – CG or otherwise – how did you pull it off?

K&S> The project is all CG and was pulled off by working really hard! It was a really intense process of ‘espresso' style development, story, animatics, set and character build, animation and render. All the usual suspects, just fast!

LBB> Which of your projects from over the years are you most proud of and why?

K&S> That's like asking one to choose their favourite child! We love a lot of our music videos as they are more personal pieces of film collaboration – we have made some of our best work that way and we love relating to music. And our two short films, Turning and Flytopia, are unique for us, as they were a true hard labour of blood, sweat and tears of a different scale. We love them passionately.

LBB> When you’re choosing which scripts or projects to work on, what do you look for?

K&S> Anything that grabs our attention, that lights our fire, or our pocket! Haha. But seriously it's more about what comes to us, and mostly these projects tend to be about some kind of fantasy, a well-made and emotional casual fantasy. It's what we love best.

LBB> Who and what are your biggest inspirations? Why?

Karni> Dance, fearlessness and fear, ambition, other woman creatives, my eye and heart, my boys, other great art pieces.

LBB> And who are your creative heroes? Or maybe you don’t have any!

K&S> We have too many to name! But not only filmmakers. We adore Edward Gorey. We love Neil Young and Tom Waits. We adore Frida Kahlo and Pina Bausch. We love Francis Bacon and Gregory Crewdson. ‘70s American cinema and also new wave American, like P.T. Anderson. Woody Allen of course. Nordic cinema. Michel Gondry, Spike Jonze for more creative commercial work and films. Orlando by Sally Potter, There Will Be Blood. We can go on forever!

LBB> When not filmmaking, what do you get up to?

K&S> Film, visual and creative work take up a lot of room, but we do manage to raise two boys. Saul loves cooking and kayaks. Karni loves dance and reading biographies. Being in nature is easy to do from Bristol (where we live). We take a walk in the woods when we need inspiration.

LBB> You’ve just joined RSA – what are your plans and goals for the year ahead? Is there any kind of project or film that you’re burning to direct that you haven’t had the chance to do before?

K&S> Well, like we said we are open to everything and like to mix it up. We would love more projects with mixed media, where live action meets animation. Also exciting opportunities to try something new – whatever comes our way we'll gladly guzzle up.

We came to the UK 15 years ago as foreigners, with a backpack full of dreams and not much else – so we see everything as a journey, an adventure. We just keep our eyes and ears open and hope for the best.