Editors’ Choice: Every story has two sides to it - this awesome interactive short lets you see both with a click of a button 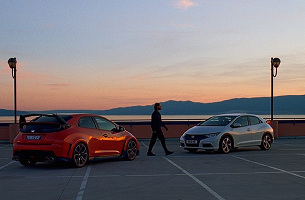 A new interactive online film from Honda launches on 30th October, bringing to life the brand’s ‘other side’ ahead of the hotly-anticipated launch of the new Civic Type R in 2015.

Honda is renowned for its reputation of engineering excellence, technology and reliability. But it’s the brand’s other side, born from a racing heritage and thirst for innovation, which this campaign heroes.

During 2015 Honda will launch the all-new Civic Type R – promising to be the most extreme and high-performing model to wear the famous ‘Red H’ badge – perfectly embodying this other side of the marque. As the film asserts, Type R is the wild child alter-ego of the Civic hatchback that customers know and trust.

The Other Side aims to bring to life these two sides of Honda by putting fans at the heart of a high-adrenaline dual narrative. The story unfolds in two parallel tales, one set during the day and the other at night. The daytime story sees a father picking his daughter up from school in his white Civic and driving her to a surprise party. By contrast the night-time narrative shows the father’s other side - an undercover cop driving a crew of art thieves to a police sting, in a head-turning red Type R. While very different in tone, the two stories mirror each other perfectly in their composition. Check the film out at: hondatheotherside.com or the trailer below.

The Other Side opens with the Civic in the daytime, with titles prompting interaction as they roll. From here the viewer can switch between the Civic and the Type R narrative, simply by pressing the ‘R’ button on their keyboard. The effect is dramatic and heart-racing, a big enjoyable gear shift between stories echoing the sensation of pressing the new Type R’s ‘R’ button to activate ‘Race Mode’.

A press of the ‘R’ key puts the director’s cut into the viewers’ hands, allowing them to switch in real time between two mirrored story lines. Through sound design and seamlessly matched scenes, you can’t help but feel the power of Honda’s other side.

The Other Side launches on YouTube on October 30th, kicking off a pan-European campaign set to continue through 2015.

                                Martin Moll, Honda Motor Europe’s Head of Marketing, says, “This campaign marks a very significant time for our brand. The Civic Type R is one of four new car launches for Honda in 2015 and provides a powerful halo-effect for the marque. Just as our products are renowned for being innovative, our communications style will amplify this. By way of example, we are not aware of anyone else creating interactive user content in the same dramatic way, which should give it a very strong appeal.” 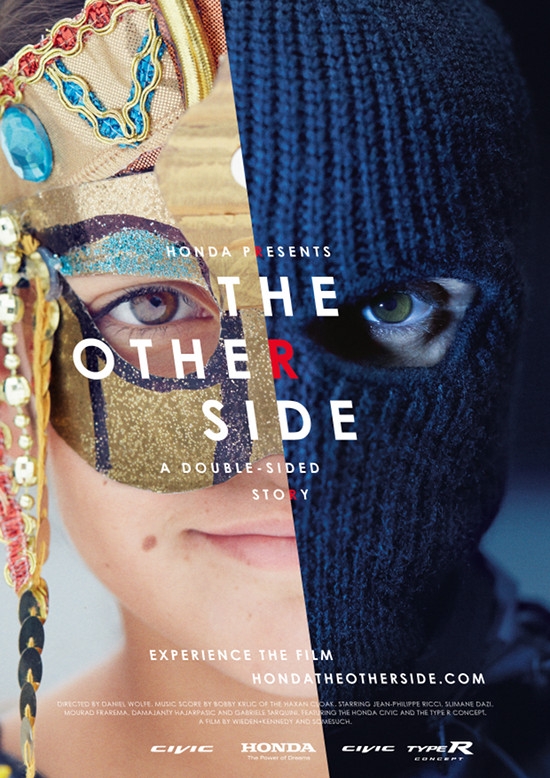 Honda UK spearheaded the campaign, investing in large-scale media support across TV, digital and social channels throughout November. The campaign kicked off with a launch event for journalists and influencers, allowing them to discover Honda’s other side for themselves in personal interactive cinema booths and get up close and personal with the Type R Concept car.

The Other Side was shot by acclaimed director Daniel Wolfe, the creative force behind award-winning commercials, music videos and the recent Cannes Film Festival highlight ‘Catch Me Daddy’. Music was scored by Bobby Krlic of The Haxan Cloak, and the interactive experience was developed with the expertise of production agency Stinkdigital.

Scott Dungate, Creative Director at Wieden+Kennedy London, says: “The beauty of this idea is in the simplicity of the interaction. The simple act of pressing ‘R’ empowers the viewer to drive the film, toggling between the two stories. It’s very satisfying and addictive jumping from the Civic day world to the high octane night world of the Type R. It’s like going into race mode, and putting your foot down. You get a sense of power and excitement. Through this we hope people will feel Honda’s other side as well as see it.”

Daniel Wolfe, Director at Somesuch, says: “I love this idea, the raw simplicity of just one button. Type R. The user creates the cuts. Jumps between worlds. It was a joy to work on: create two dual narratives that weave in and out. Get to work with Jean-Philippe Ricci, Slimane Dazi and Mourad Frarema. Shoot on 35mm with Robbie Ryan. Create the two sides of the Honda world, and bring them into collision. Honda has a heritage of great advertising, and it was a pleasure to work with the W+K team on this project.”