Why O2 and England Rugby Embraced the Bushido Warrior Code

Before the action kicks off in Japan, Laura Swinton spoke to O2 and VCCP about their spirited new campaign 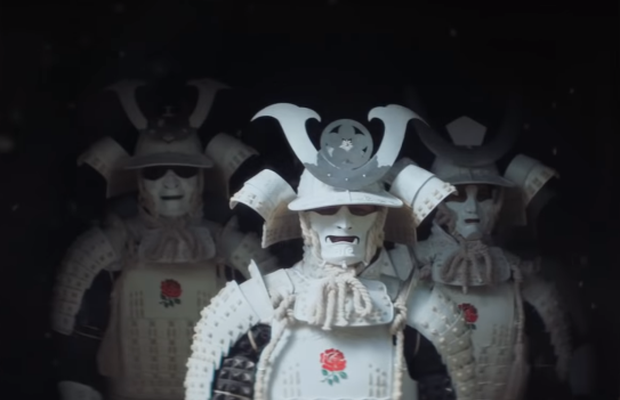 These are the tenets of Bushido, the warrior code that informed the samurai way of life. It’s also a code that Eddie Jones, the England team manager, who also happens to be half-Japanese, uses to lead the team. And for mobile provider O2, it’s a set of values that informs their new campaign that champions the England rugby team in their endeavours in this year’s world cup.

Devised by agency VCCP, the campaign rallies English rugby fans behind the team with the call to action #BeTheArmour. The campaign combines Kurosawa-esque creative that imagines the team as samurai dressed in white armour, bolstered by a vast, diverse army of fans, with a more grounded series of social content that sees reality star Jamie Laing explore different aspects of Japanese culture together with pundit and former England player Ugo Monye.

You can watch the cinematic spot below:

The campaign revolves around a rallying call to the England fans to get behind the team, to metaphorically #BeTheirArmour. With that in mind, the hero film transports the team to an ancient Japanese village that could have been plucked straight out of Rashomon. There, craftsmen forge white samurai armour and the players are suited up ready for battle. It was directed by Rogue’s Sam Brown and, with incredible attention to detail, sets in Prague and in Bristol were transformed. The meticulous costume designer Rosa Dias was tasked with creating the magnificent white plated armour as well as authentic underclothes and wrappings. The track is from up-and-coming artist Clare Wyndham – ‘My Love Will Never Die’ – an unexpectedly modern yet haunting song. Initially the creative team had planned an orchestral composition made especially for the campaign but they decided to go a less obvious route.

Of course it’s easy to lapse into caricature and stereotype when depicting a culture so different from one’s own, so the team were careful to ensure that the creative was accurate and respectful. Luckily O2 had an expert to call on in the shape of Eddie Jones.

“It’s something we really wanted to make sure we avoided,” confides O2 CMO Nina Bibby. “So a couple of things: first of all Eddie Jones is half Japanese himself. He has a home in Japan, he’s lived there so we spent quite a lot of time with him making sure that we didn’t stray there. We worked with experts from SOAS… to make sure that we didn’t fall into easy stereotypes.”

“You can see the detail we put into it to make sure everything respected Japanese culture. Respect is at the start of everything we do,” agrees O2 Head of Sponsorship Gareth Griffiths. As he explains, this sense of respect is core to the Bushido ideals that underpin the campaign as well as being a value that he says the Rugby Football Union (RFU – the governing body for England rugby) holds in common with O2. It’s part of the reason that the partnership between the two has been so successful and enduring – O2 is in its 24th year of sponsorship of the England rugby team, making it the longest-running sports shirt sponsorship deal in the world.

From a strategic point of view, the campaign builds on a movement that kicked off just before the last rugby world cup. O2 have been calling on fans to show their support by ‘wearing the rose’ (the red rose is the national flower of England and the symbol of the rugby team). And so this year, donning the shirt and ‘wearing the rose’ has been given a Japanese twist with the #BeTheirArmour tagline.

“This year it’s all about the support ahead of the biggest rugby event in the world and for us, what better way to unite fans behind the team than through the symbol that represents the very heart of England. A symbol that’s sewn onto the shirt of every rugby player: the rose. The red rose. We’ve been building this movement and uniting the nation and calling on everybody to wear the rose to show their support for England rugby,” says Nina. “We first introduced it in 2014 because we wanted a really simple rallying cry to get the nation behind our home team. So it’s for the men’s team, the women’s team, the grassroots, it’s all about galvanising people.”

For the 2019 World Cup, though, O2 faces a particular challenge. With a brand strategy that’s all about bringing people closer together and an approach to sponsorship that is driven by giving customers unparalleled access to the sportspeople and bands of the teams and events they sponsor, this year O2 had to figure out how to achieve this when the tournament is unfurling so very far away. With an eight hour time difference, matches air in the morning in the UK creating a sense of distance for fans and players alike.

“One of the things I love about this campaign, the content, this tournament is being played on the other side of the world, it is being played in the mornings a time you wouldn’t usually associate with it – it feels foreign, it feels a long way away – what we’re trying to do with this is create excitement and interest around Japan, around that country and what’s happening there,” says Nina. “I think in that respect the players are really behind it.”

“It’s really interesting when you speak to the players, they do feel one stepped removed when they go to Japan,” adds Gareth. “They’ve got to immerse themselves in the culture over there and everything they get to see on social, they’re really excited by it.”

With the last rugby world cup, England was the host nation, which meant that there was plenty of opportunity to engage with fans through on-the-ground activation. This time though, the campaign will really lean on social activations, though there is a programme of events planned. In a short space of time, people’s viewing habits have changed dramatically meaning that the brand and agency had to approach the media mix and social strategy in a very different way compared with 2015.

One massive change, though, is one that O2 and VCCP have sought to leverage. With the final season of Game of Thrones being heralded as the ‘last watercooler TV moment’, live sports represent a unique opportunity when it comes to appointment TV.

“Ultimately the insight is about our desire for shared experience and, particularly in this day and age, experiences that are not time shifted,” explains VCCP’s Charles Vallance. “So we’re all having experiences at different times of the week, not quite knowing what bit of what TV show people have watched. There’s less and less that we can share in common and the rise of rugby and the huge about of interest in the Premiership are examples of feeding that cultural need and creating a sense of belonging.”

And, in a sense, that feeling of belonging is a thread that runs throughout the whole campaign platform. From the unifying, ancient warrior code that informed the creative that the team hopes will motivate players and fans alike to the  very 2019 media strategy that will bring England fans a little bit closer to the action in Japan.