O2 SIMs and data vouchers offered to every Big Issue vendor across the UK, giving them access to free mobile connectivity each month 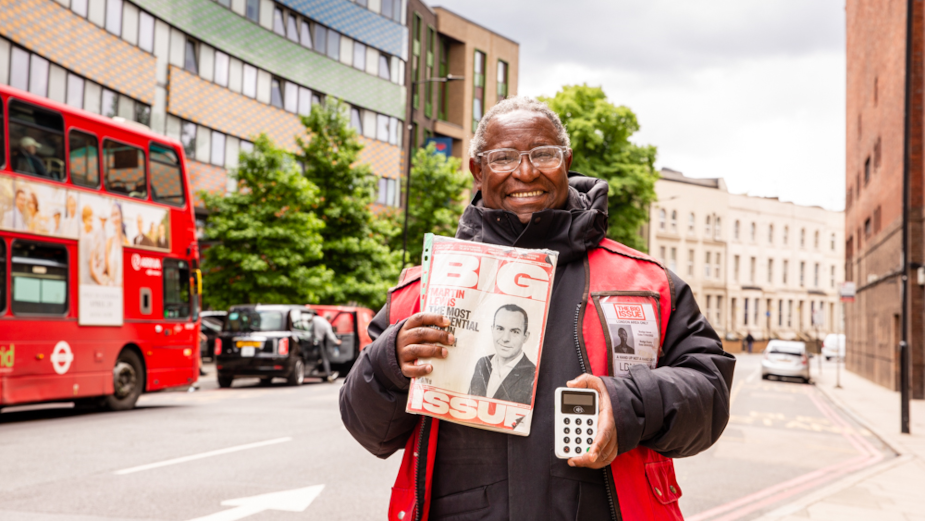 Virgin Media O2 has announced it will be working with Big Issue Group to support all Big Issue vendors with free O2 SIMs and data vouchers, as the cost-of-living crisis deepens this Christmas.

Last year O2 gave over 200 Big Issue vendors free data plans, enabling them to take contactless payments, providing vital support at a time when 52% of magazine sales are via contactless. This year the company will be offering monthly data to the magazine’s entire network of vendors. This comes as it is reported 18.7 million people are expected to have their ability to get online impacted by the cost-of-living crisis[1].

In the UK, nine out of ten in-person transactions are now via contactless, which makes vendors’ access to data crucial in order to successfully sell the magazine. On average vendors who use contactless make 30% more than those who do not.

The partnership between Virgin Media O2 and Big Issue Group, has been brokered by Havas Entertainment’s specialist content and partnership division JUMP. The campaign sees O2 integrated in advertorial, social, newsletter, display and PR through The Big Issue. Now in its second year, the award-winning campaign won the PPA award for Commercial Partnership of the Year.

Stevie Paterson from Edinburgh, one of the Big Issue vendors given O2 data last year, explained, “The O2 SIM was really important to me. It meant I could set myself up on Zettle to accept contactless payments – now, it’s how I sell about half my magazines.”

Big Issue vendor Darren Brown from Middlesbrough, who was also part of last year’s data roll-out, said, “I’ve never been a technology person, but they showed me how to use it and access the internet. If a customer is looking for somewhere, I help them with the maps on my phone, and I’ve even had my supermarket shopping delivered. The O2 SIM card is the best thing I’ve ever had through the Big Issue.”

Russell Blackman, managing director at The Big Issue, says, “We are delighted to be continuing our invaluable work with Virgin Media O2, following its successful launch last year of the National Databank. By extending this opportunity out to all Big Issue vendors, it will enable and empower them to boost their sales through cashless payments at this vital time of year, as well as being able to access essential online services. As the cost-of-living crisis deepens, support for those who might otherwise struggle to connect is vital. With O2 and the National Databank, we can help support people to stay better connected.”

Terri Squibb, head of partnerships at JUMP, part of Havas Entertainment, said: “This is truly a story where media is a force for good in the world. We’re evolving the story telling into richer content, utilising the UK’s best experts in homelessness, The Big Issue, to help narrate it. Following the success of the first year, we’re keen to reach more vendors this year through the partnership to ensure O2’s package of support makes an even more meaningful difference.”

Gareth Turpin, chief commercial officer at Virgin Media O2 explains, “This year we wanted our Christmas campaign to not only help raise awareness of the support available via the National Databank, but to get data into the hands of those facing an unconnected Christmas. As part of this, we’re proud to be partnering with the Big Issue for the second year in a row to offer all vendors access to free mobile data each month. We know from the success of last year that this connectivity is crucial to facilitating mobile payments in an increasingly cashless society as well as helping vendors to stay connected to loved ones and get access to key services.”

The roll-out of data plans to Big Issue vendors comes as part of Virgin Media O2’s wider commitment to tackling data poverty. Partnering with national digital inclusion charity Good Things Foundation, the company pioneered the National Databank –  like a foodbank but for data – in 2021 which provides free mobile connectivity to people who need it, pledging to donate 61 million GB of free data by the end of 2025. The company also recently announced that the Databank would be accessible on the high street for the first time via 10 O2 stores across the UK, and has put the Databank front and centre of O2’s major new festive advertising campaign with the O2 Christmas Sim Cards.