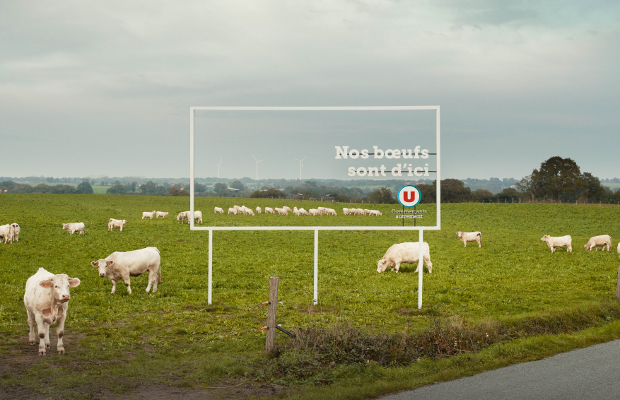 The men and women of U Shops are not your ordinary retailers. Family merchants for generations, their unique way of doing business is embedded in their DNA, setting them apart from other major distributors. A practice that can be seen daily in a multitude of ways. U Shops prioritise collaboration with businesses that produce, manufacture and process in France, and they stock their shops as locally as possible. Thus, 75% of U food products are manufactured in partnership with French businesses, and 100% of U’s raw fresh products are guaranteed to be of French origin.
This is the role of the brand’s new logo, unveiled in summer 2018, Commerçants autrement [A Different Kind of Merchant], to highlight this special way of doing business. One of the pillars of this new logo is hyper-proximity, which is a central focus for the brand.
This hyper-proximity comes with a strong desire for each shop to be locally sourced, as soon as it is possible to do so, by reaching out to trusted local producers. It is this desire that has propelled the brand to the top of the leader board when it comes to involvement in community life. The brand’s objective is to loudly and clearly reaffirm its status as a champion of the community.
In December 2019, the brand launched their ‘Where does it come from?’ campaign, to highlight the importance of local sourcing at U.
With transparent advertising signs, the brand shows passers-by and drivers where their products come from, in the most natural way possible. Eco-friendly signs, made without paper, ink, glue or lighting. After installing these signs on the premises of the brand's grower suppliers, the agency created a photo and video recording of the operation, in order to spread awareness of the project to as many people as possible.
A 360 degree marketing plan will give this campaign national visibility including six and fifteen-second films dedicated to four products that represent the brand's overall approach (beef, eggs, apples and oysters), that will be available digitally and on social media. A 30-second video will also be released on YouTube. A regional press and magazine campaign will allow the brand to distribute our four print visuals regionally and nationally. On social media and through the hashtag, #ProduitDici [#LocalProduce], the brand invites its producers across France to make their voice heard on its Facebook pages, in order to showcase the quality of its local offering.