Quirky animated short film takes us from childhood to the stars 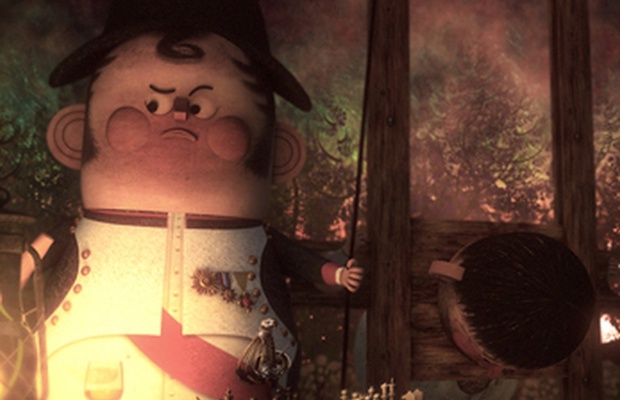 Trunk’s director Rok Predin has just finished his eagerly anticipated film “One of a Kind”. It’s 3 minutes 40 seconds of pure richness and joy, from the near expressionist visuals to Jim Carter’s resonating performance, and from Daniel Pemberton’s dynamic music score, to Barnaby Templers sound design and beautifully measured audio mix!

The film is a contemplation about all the people who had to meet, all the tiny acts of fate and chance that had to come together, in order for you to sit here right now, reading this! Rok felt that this overwhelming question allowed ample opportunity for lots of humour, sentiment, and beauty.

Rok had the idea for the short over 2 years ago but commitments (like making other films!) delayed the start of the production to the beginning of this year. The story and script were developed with producer Richard Barnett, and as the epic task of designing over 70 characters took place, with costumes so beautifully designed and created by Sara Savelj, the team was carefully put together.

First on board was Ivor Novello winning composer and friend, Daniel Pemberton. In between finishing Ridley Scott’s "The Counselor" and starting his new Hollywood feature, now well under way, Pemberton got behind the story and the film. Rok notes; “we knew the music had a massive part to play, especially to help re-iterate different moods and time periods throughout the piece and felt very fortunate to have Daniel on board”.

Now with such a rich visual aesthetic, and a beautifully composed track, the team knew they needed a big performance from a commanding voice, and who else but the incredibly talented Jim Carter. A long illustrious stage, film and television career, which includes appearing at the National Theatre, starring in feature films such as "Shakespeare in Love" and a host of TV work including "The Singing Detective" and "Downtown Abbey", ensured he had a voice with just the right kind of timbre, elegance and warmth.

At the recording the guys were bowled over, ‘It’s always so much fun watching someone with so much talent, doing their job.’ Before Predin and Barnett started the recording session, and having worked with numerous actors in the past, they re-assured each other that they wouldn’t get overwhelmed with the first take…..But, ‘it was just a joy to watch’ says Predin, ‘he was acting out each sentence with so much commitment and understanding and we knew when he had finished we had captured lightning in a bottle’.

A team of animators came on board, and with so many characters to get stuck into, there was ample opportunity to develop miniature narratives within each of the scenes, it was play time! Rok, then had the task of pulling everything together, with heavy renders coming out of Cinema 4D numerous techniques were put together in order to streamline the process. The compositing as always was a joy to behold, and a first chance to see the culmination of 6 months hard work!

Finally the call went in to long time collaborators Jake Roberts and Barnaby Templer at Fonic post production. Barnaby put together a team of foley and voice artists to create all the vocalisations and the plethora of sounds needed for the film. The balance was key, creating enough room for all the different audio elements to shine in their own right and do the job that they were designed to do. Needless to say when Rok and Richard sat in on the final mix they were blown away.