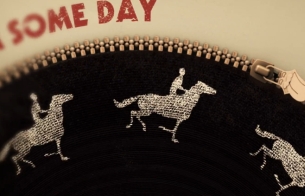 Lightning does strike twice! That was the feeling at Trunk’s studio when Emily Tedrake from Polydor got in touch to create another lyric video for the mighty Rolling Stones. Following Trunk’s very successful lyric video for ‘Doom and Gloom’, which has had over 13 million hits, making it the Stones most watched video on their YouTube channel, the stakes were high! The team was tasked with creating a video for ‘Wild Horses’ the 3rd track on the band's seminal album ‘Sticky Fingers’. The album is being re-released with a stunning 100+ page booklet to coincide with the 45th anniversary of its first release.

It was a daunting task as director Rok Predin notes. “Some jobs are just very special and this was certainly one of them. Although we had worked for the Stones before, working on an album that is so famous was ever so slightly intimidating! We knew we had to include a zip, which referenced Andy Warhol’s iconic artwork that was used for the original album cover, and the typeface from the new booklet that accompanies the re-release of the album. Other than that we were pretty much given a free hand. ”

The resulting video is stunning and beautiful. Created using Cinema 4D and After Effects, the team used the track's gentle feel to pace the video while certain lyrics suggested themes and movements. Trunk Animation’s talented Layla Atkinson developed the artwork for the video using elements from the booklet that included the band members’ fingerprints and smudges. Photographs of the band were manipulated by the team and degraded in Photoshop, as was the typeface, to fit into the overall look and feel of the finished video.

The most challenging part for Layla “had to be scanning Rok’s beautiful 12 string guitar, to create the sequence in which the fret board is zipped up". The zip ‘fob’ used, made from John Pasche’s famous lips logo, was especially appropriate as ‘Sticky Fingers’ was the first album in which the logo appeared.

Producer Richard Barnett was thrilled with both the job and the finished video, especially given the tight turn around. “While we love all the projects at Trunk it’s always nice to be asked by rock royalty to get involved with a release. Layla, Rok and the team have done a great job. The track was originally a lullaby to Keith Richards’s son Marlon, and the tender pace of this video is far softer than the passionate pace of our previous Stones vid. So far it has been a very exciting time at Trunk with a big studio move just after finishing our Coldplay project, and now seeing in our new studio with a job for the Rolling Stones, it’s been a great start to the year!”