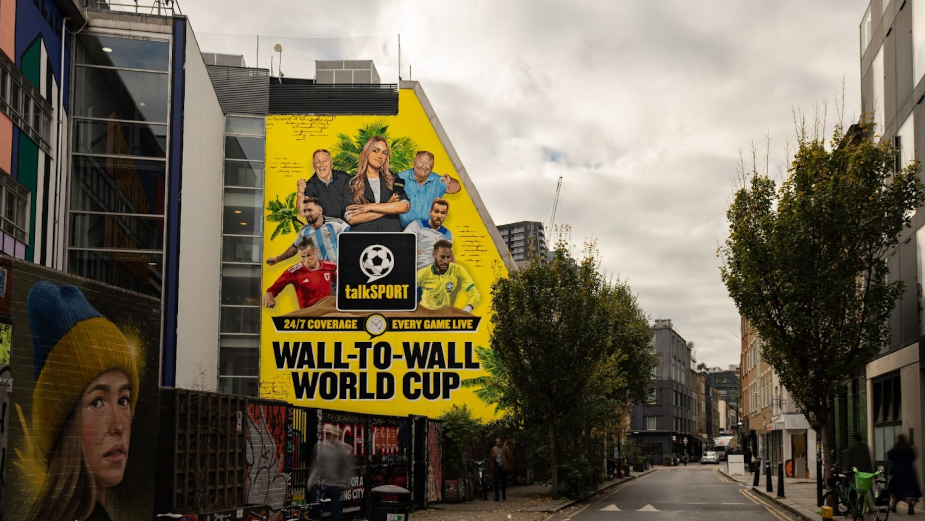 talkSPORT is the home of World Cup radio coverage, broadcasting every game live and covering the tournament around the clock. It’s wall-to-wall coverage, so to promote it, they’ve taken a wall in Shoreditch and covered it in a 50ft mural.

At the centre of the campaign is the 50ft mural, which will be supported by social, press and digital. A series of short films will bring the mural to a wider audience, one of which shows two hooded figures painting the mural before revealing themselves as talkSPORT Gameday Phone-In host Gabby Agbonlahor, and the king of sports breakfast broadcasting Alan Brazil. Brazil is joined by fellow World Cup veteran Ally McCoist, who laments the pair for running late to a live broadcast.

Lee Clayton, head of talkSPORT, said, “Our audience should get ready for the most incredible wall-to-wall reporting, insight and analysis from commentators and pundits across our network. It’s our strongest-ever squad and this campaign highlights our 24/7 coverage brilliantly.

“I can’t wait to see Jim White and Simon Jordan breaking stories and inviting the biggest names from the hotbed of Qatar. This World Cup is going to be explosive and we have the best possible team covering every moment on and off the field, delivering their insight and opinion - tune in and you won’t miss a second of the action.”

Will Martin, head of marketing, News Broadcasting, said, “For the duration of the World Cup, talkSPORT will be the only broadcaster that will provide 24/7 coverage of the tournament. Our bold ‘Wall-to-Wall’ campaign will celebrate this message in a way only talkSPORT can. Our mural will kick things off and set the tone for the rest of the campaign, leaving our listeners in no doubt who they need to turn to for the best World Cup coverage with the best talent in the game.”

Russell Ramsey, Pulse executive creative director on the campaign, said, “We wanted to capture the excitement of the World Cup and talkSPORT’s unique always on coverage. It’s literally Wall-to-Wall.”

The media was planned and bought by Pulse Media through mSix&Partners and Kinetic UK, and the campaign will run throughout the World Cup.