Editors' Choice: The latest PSA created by BBDO NY and directed by Henry Alex Rubin of Smuggler captures the horror of students using back to school essentials to survive a school shooting 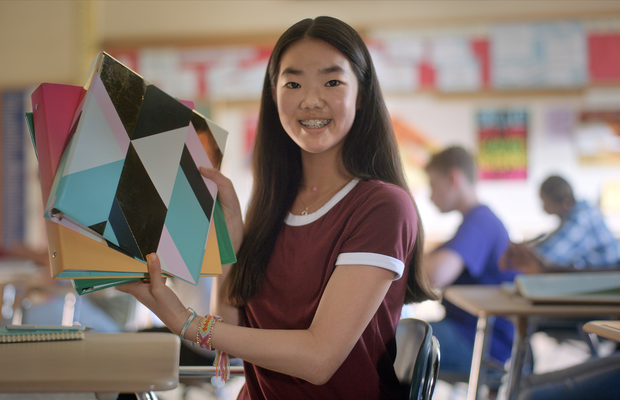 Following one of the deadliest years on record for school violence in 2018, Sandy Hook Promise (SHP) is debuting its latest PSA, “Back-to-School Essentials”, a powerful and impactful video that highlights the anxiety and fear students face in the reality of school shootings. Since the tragic shooting at Sandy Hook School almost seven years ago, reactive measures to gun violence such as active shooter drills and bulletproof backpacks have increased. Many students fear that it’s only a matter of when, not if, a shooting will erupt on their school campus. Subconsciously accepting shootings as regular occurrences has become the “new normal” at schools and public spaces across the country. But it doesn’t have to be this way. By focusing on early identification, action and intervention it is possible to prevent tragedies.

View the Back to School Essentials PSA here.

To bring awareness of this horrific “new normal” and the stress that students face on a daily basis, SHP and BBDO New York have produced the new PSA video that starts off as a cheery and often-familiar back-to-school ad but slowly unfolds to highlight students using everyday back-to-school items to survive a shooting, shedding light on the gruesome reality that students face.

As with its previous PSAs, including the award-winning “Evan” that was viewed over 100 million times and the Emmy-nominated “Point of View”, SHP reinforces that there are proven preventative solutions, including its Know the Signs programs. These programs teach students and adults to recognize warning signs and threats that often precede an act of violence or self-harm, along with the steps to properly intervene and get help before violence occurs. It is documented that 80 percent of school shooters told someone of their plans prior to taking action - yet no interventions were made as the signs were overlooked, misunderstood or not taken seriously.

“Back-to-School Essentials” will be SHP’s biggest campaign to date, as it is being launched with a 360 integrated campaign inclusive of print, digital, radio, and out of home placements. Over $2 million in donated media placements have already been secured to drive this important campaign. Leaders from across the industry committed to donating media, including top media brands such as Omnicom Media Group, CNN, IFC, AMC, YouTube, Teads, PopSugar, Conde Nast, SnapChat, Sports Illustrated, The Wall Street Journal, New York Post, Fortune, iHeartRadio, Pandora, Intersection and Outdoor Media. PHD New York has partnered with SHP for all PSA campaign media planning and strategy.

In conjunction with the PSA, SHP also provides a downloadable brochure that highlights many of the warning signs to help students and adults recognize them when seen. This Know the Signs brochure is available at www.SandyHookPromise.org.

“So far this year there have been over 22 school shootings, and with students heading back to school, it seems sadly probable that we will see more incidents. This is unacceptable, given that we have proven tools to prevent these acts from occurring. We cannot accept school shootings as the new normal in our country. Our goal with this PSA is to wake up parents to the horrible reality that our children endure. Gone are the days of viewing back-to-school as just a carefree time, when school violence has become so prevalent. However, if we come together to know the signs, this doesn’t have to be the case. I hope that parents across the country will join me to make the promise to stop this epidemic,” said Nicole Hockley, co-founder and managing director of Sandy Hook Promise and mother of Dylan who was killed in the Sandy Hook School shooting.

To date, more than 7.5 million people nationwide have been trained in Sandy Hook Promise’s lifesaving Know the Signs programs that focus on gun violence prevention by training youth and adults how to identify at-risk behavior and intervene to get help before a tragedy can occur. Through these no-cost proven programs, Sandy Hook Promise has averted multiple school shooting plots, teen suicides, and countless other acts of violence.

About Sandy Hook Promise: Sandy Hook Promise (SHP) is a national nonprofit organization based in Newtown, Connecticut. SHP is led by several family members whose loved ones were killed in the tragic mass shooting at Sandy Hook Elementary School on December 14, 2012.  SHP’s mission is to prevent gun violence and other forms of violence and victimization BEFORE they can happen by creating a culture of engaged youth and adults committed to identifying, intervening, and getting help for individuals who might be at risk of hurting themselves or others.  SHP is a moderate, above-the-politics organization that supports sensible program and policy solutions that address the “human side” of gun violence by preventing individuals from ever getting to the point of picking up a firearm to hurt themselves or others. Our words, actions, and impact nationwide are intended to honor all victims of gun violence by turning our tragedy into a moment of transformation. Make the Promise at www.sandyhookpromise.org.

Karlie Kloss Teams with SAP to Unite all SuperHERoes of Coding

Bon Jovi Gets Fans to Sing Their New Single For Themselves

M&M's Makes an Appearance at Biggest Night in Hollywood

Have Some Sympathy for the Devil, He Was Bullied at School