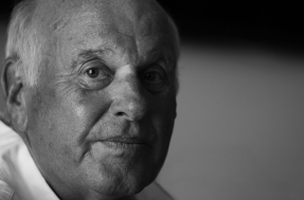 Mentor, businessman, award-winning editor and father to a trio of accomplished industry professionals, Rye Dahlman of Rye Films will be inducted into the AICE Hall of Fame at the upcoming AICE Awards presentation, taking place in Los Angeles on May 14.

Dahlman’s company, Rye Films, was one of the early leaders in commercial editing and post production on the West Coast.  His company edited work shot by such top commercial directors as Jack DeSort, Rob Lieberman, Dan Nichols, Rick Levine, Robert Black and Leslie Dektor, working regularly on high-profile campaigns for brands like Budweiser, Pacific Bell, McDonald’s, Pepsi, John Hancock, Boeing and many others.

Widely hailed as a well-liked, admired and respected member of the post community, Dahlman gave numerous talented editors and post producers their start in the industry.  “When we talked about who would be a great candidate for the Hall of Fame, Rye’s name just kept coming up,” says Betsy Beale, President of the AICE Los Angeles Chapter, which is hosting the awards show this year, and Executive Producer at jumP in Santa Monica.  “Naming him to the AICE Hall of Fame was almost by popular demand.”

Lieberman was then the staff editor for the production company DeSort & Sam, but was looking to move into directing. He clicked with Dahlman and hired him as his assistant; shortly thereafter, Dahlman was cutting on his own, as Lieberman began to direct full time.  When De Sort & Sam closed in the late ‘70s the owners handed over their editing equipment to Dahlman, who launched his own company. Based in Hollywood for 20 years, Rye Films later moved to Santa Monica in 1999, where it remained a mainstay of the commercials industry in Los Angeles. Dahlman closed the Santa Monica office in 2005 but continues to work on selected projects under the Rye Films banner.

During the time Dahlman was anchoring Rye Films he also launched Jigsaw, in partnership with longtime friend and associate Michael Romersa. The two editorial companies operated independently of each other, working out of offices in Santa Monica that were just miles apart.

Reaction to Dahlman’s induction was unanimous. “Not only does Rye deserve to be in the Hall of Fame, but he’s one of the finest commercial editors in the business,” says Lieberman. “He loved editing, he loved the industry and his work speaks for itself. I think he’s just brilliant.”

Robert Black was a former Creative Director at FCB in San Francisco who became a sought-after commercial director; he worked closely with Dahlman as both an agency client and a director. The two continue to collaborate, working on a documentary titled “Loving Henry” that’s due to be released theatrically next year.  Dahlman both edited the film and serves as a co-producer.

“I felt originally that Rye had a lot of storyteller in him,” Black recalls. “He had that sense of how a journey might unfold in thirty or sixty seconds.” The pair first worked together on a series of groundbreaking episodic commercials for Pac Bell that Black created and Rick Levine directed. Later, after Black launched his directing career, they teamed on more Pac Bell spots as well as Alaska Tourism ads; both campaigns were award-winners.  “From the start,” Black recalls, “Rye was meticulous. He was all about story and the service of an idea.”

Sheila Sweeney, who went on to open Bob ‘n Sheila’s Edit World in San Francisco, got her start at Rye Films as Dahlman’s assistant. She credits Dahlman with mentoring not just herself but many other editorial talents over the years, and says Dahlman’s tradition of promoting from within and educating young editors and producers was complemented by the company’s role as an innovator in new technology. “During the transition from cutting on film to cutting on video, we were in the leading edge of that change,” says Sweeney.

Friends and colleagues say Dahlman was first and foremost a family man, and that his company was an extension of his family life. His wife Susan managed the books, and his three children grew up in the industry and work in it to this day. Megan Dahlman is currently EP at Cutters in Santa Monica, and before that worked at Union, Crew Cuts, Post Logic and Jigsaw.  Another daughter, Mia, is a production manager at MJZ, while son Ryan is a freelance editor.

“Family was very important to Rye; he wanted to be around them, which is why he started his own company,” Black explains. “That’s what gave it that family feeling everyone responded to.”  Asked to describe the vibe at Rye Films, Black says “the place ran like Rye. Everyone was outstanding; it was a place you could trust. We’d work all day, break for lunch, and then hit it again. It was a great experience.”

Despite his success and his role as a leader in the industry, Sweeney says Dahlman remained down-to-earth and accessible. “His goal was to be the best editor he could be and do the best creative work,” she says. “For me, it was special; I met some of my closest friends while there, including the man who became my husband. I miss working there, to this day.”

The 2015 AICE Awards, the association’s 14th annual competition, will take place on Thursday, May 14, 2015, at the Skirball Cultural Center in Los Angeles. For more information about the awards, visit www.aice.org.