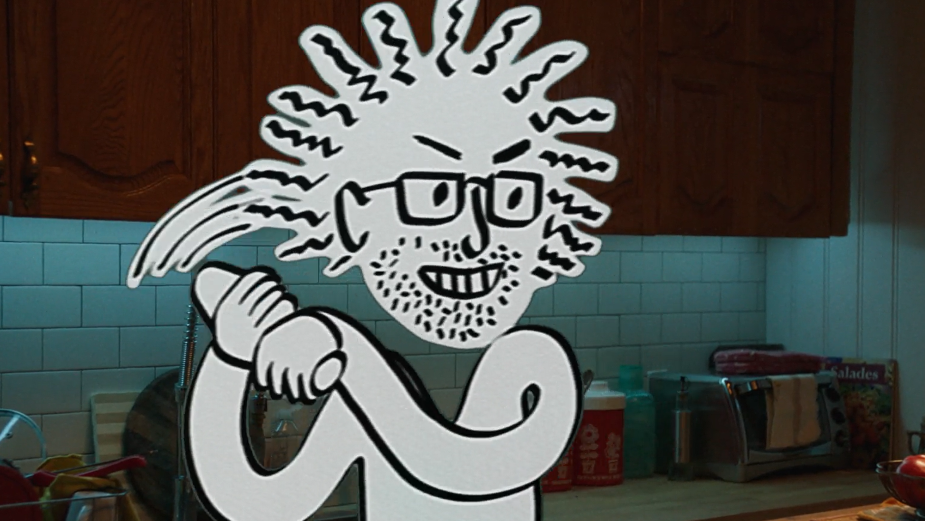 RenoAssistance by Desjardins pairs clients with reliable contractors who have the qualifications to execute large-scale residential or commercial renovation projects. Founded in 2010, Desjardins became its majority shareholder in 2020.

For its first mass campaign released in the spring of 2022, the brand had enlisted stand-up comedian François Bellefeuille as its spokesman. Wanting to take things to the next level, RenoAssistance retained the services of THEUN KNOWN following an agency review and pitch earlier this summer.

“We greatly appreciated the agility, creativity, and passion that THEUN KNOWN team has put into the campaign’s conception and production. It was a great collaboration that generated a real interest towards RenoAssistance's services, as well as showcasing François Bellefeuille's artistic personality," says Véronique Dupuis, director, marketing and client experience for EspaceProprio..

For creative house THEUN KNOWN and its media planning partner PANOPLY, it was all about conveying the brand message through culture while building a full-content narrative ecosystem around it at the same time. In RenoAssistance’s case, that cultural centrepiece was a five-minute, live-action short-film. This 'ignition piece' was launched weeks prior to the actual marketing campaign along with a 30-second teaser, 60-second trailer and a limited-edition comic book starring Mr. Bellefeuille himself. RenoAssistance branding was minimal - if not completely absent - as the sole purpose of the pre-campaign was not to sell, but to entertain and generate enthusiasm for the story.

“The solution is not the push, but the pull,” says Fayçal Hajji, president and founder of THEUN KNOWN. “When audiences see François Bellefeuille, they expect to be entertained. They don’t want to see a spokesperson who has a few seconds to pitch a product or service. So when he tackles a subject like home renovations, consumers want it to be done in a way that’s creative and fun. It has to resonate with them and meet their expectations. We want them to watch it because they want to, not because they’re forced to.”

Directed by Sébastien Landry (Polyvalente, Game of Death) and featuring animations by Colegram Studio with Vincent Bilodeau and Pascal Brousseau, the film stars Bellefeuille as he tries to come up with new material for his comedy act. Feeling a bit uninspired, he is drawn away from his office by a loud noise, triggering a series of strange encounters within his own home: a stoic falconer covered in plaster, twin indoor painters and the drawing (of himself) from the poster of his tour. But is it all real or a manifestation of some deeper anxieties?

“Renovations are stressful for anyone, but when they’re compounded by the stress of working from home, things can get really ugly,” says Louis-Hugo Marchand, creative director, and writer on the project. “François’ home is his workplace. If that’s in shambles, everything is. It’s become a real concern for many people in recent years. But RenoAssistance wants them to rest easy, knowing their homes are in the hands of verified contractors.”

The campaign began in September and will run throughout November - in both English and French - in major Quebec markets. Shot, recorded, and photographed on set during the production of the short film, the campaign also includes print, out-of-home, two TV spots, two radio spots, social media, online display ads and online video ads.

Footballers 'Kiss’ in Soccer Video Game in Response to Qatar'sAnti-LGBTQI+ Policies
Dream Teams: The Power of Invisible Trust with Kaitlin Doherty and Matt Litzinger
Brewer Lion Encourages Aussies to Give a XXXX About the Environment
Thiago Dantas, Tom Clapp and Will Robinson Join Electric Theatre Collective