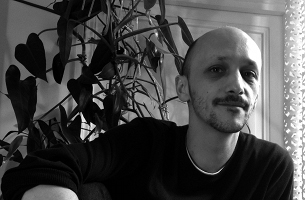 For Cédric Canaud, essential to slick design is user interaction. Inspired by time in the Italian city of Palermo and its ever-evolving urban landscape, the French designer pushes users to interact with products and question their utility and purpose. Cédric spoke with LBB about all things design, choreography, childhood and the sweet, sweet smell of fresh pains au chocolats.

LBB> Where did you grow up and what kind of child were you?

CC> I was born in a small French town in Auvergne called Thiers. It’s a peculiar place, littered with old spinning wheels, stone valleys and old nineteenth century factories that have all burned and remained intact since. There’s a contemporary art centre installed in one today. The name of that part of the city is ‘Le creux de l’enfer’, which means ‘The Hell’s Hollow’. And on top of that there’s also a new industrial zone that’s called ‘The End of The World’, and when I was younger, to get home I had to take the ‘Chemin des Morts’: the Death Road. I know it sounds like a movie, but it’s entirely true!

LBB> What kind of child were you?

CC> When I was a child, everybody at school used to call me ‘boule de gras’: ball of fat. I have to say that I was very, very greedy. My parents were bakers/pâtissier and my dad made the most excellent cake in the world! It was so cool to wake up to the smell of pains au chocolats. Apart from that, I was a calm kid. I was always building card castles in my room, and in the summer I was always on my bike, riding with friends.

LBB> You studied fine art in Rennes and Palermo - how did the cities differ creatively? And how did the experiences differ as a whole?

CC> Rennes is a very cultural, dynamic and young city. The time I spent there was one of total discovery. But the real shock was Palermo. After a few years in the Fine Arts School of Rennes, I left for Sicily on a seven-month exchange programme. The shock was more from the city than my studies. Studying abroad involves a change in your look and way of thinking. It becomes more flexible, and you are willing to experience things, new things. Everything becomes exotic! We look at and note what’s new or disturbing to us, I think that it opens perspectives after a long time of digestion. I stayed there for seven months, which was a good period of time compared to a vacation in which to discover the city.

I have very strong memories of these few months. It was an unforgettable experience that continues even today.

Palermo’s architecture is really unique. It reveals the story of the city - its history and position at the Mediterranean Sea. The events that those buildings have experienced since their construction - demolitions, reconstructions, etc. - can be read on the facades. It almost seems to bend to the needs of the townsfolk. The city is not built to answer a need it’s the need that appears and accentuates something already in existence, sometimes over centuries. The idea of heritage preservation in France is different. A type of freedom emerges from these ‘monstrous’ constructions. Usual western standards and codes are thrown out, and instead styles and buildings overlap.

LBB> How would you describe your approach to design?

CC> The starting point for a project often stems from enjoying and considering all qualities of a specific material and its ‘mise en scène’ in our daily lives. Right after that comes the question of how to exploit these qualities and exploring how a user could interact with them?

There’s a real flow in making somebody manipulate, move or apprehend to the shape of an object. I always try to propose an active experience for the user. I play with rules to lead behaviours and always make the experience one that pushes the user question it.

I'm not trying to revolutionise or change the way something works. Instead I want to question it. I like to look at an object’s needs and possibilities - and that’s when the idea of design comes into play.

LBB> Your project 'Jouer la matière - La Corbeille' seems to encourage user interaction and exploration. Were those ideas in your mind during its design and creation?

CC> That project follows much of what I said previously - I want to conduct a simple experiment on the user. The users had to build the final object by deciding which curated pattern they wished to install. The equipment created a link between shape and utility, and questioned those two components of the design. They softly collided to create doubt and questions about this object’s status.

LBB> Can you tell us a bit about that project and what inspired it?

CC> I had just spent a long time filing and doing administrative stuff and was missing the process of making things. So I wanted to get carried away experimenting with my equipment before actually knowing too much about the creation that was going to come out of it. A few weeks later I had a collection of mini paper sculptures, which set up a number of elements of research.

The plywood produces a patterned edge that produces a flat surface and geometrical style that encapsulates to create a 3D silhouette. There seemed to be a link between the 2D and the 3D, and the results of that became the central point of my research and the starting point for the final product. The project turned out to be more of a general research project than one of actually thinking of a function and designing something to fit that. It was a process that allowed for a range of results.

It is an on going project. Other products are set to come out of it, and they will continue to question purposes and status. There will be tables, furniture partitions, shelves and more that will all have that in common. Instead of being just standalone items, they will be sculptures that are ready to be activated by the accession of another shape, such as a fruit, a plant or books. They are bases, authorising function and speaking to us about our conception of every day shapes.

LBB> Which of your projects are you most proud of and why?

CC> It’s probably the next one that I’m set to release because it’s going to unlock new research. In continuation of 'Jouer la matière - La Corbeille', it will persevere with questioning uses and forms.

I’m also working on the next stages of ‘Jouer la matière’ – they will be on a greater scale but will still maintain the same ideas. I also really like ‘Un peu comme Gulliver’. It was the first project that I wanted to exhibit. It excited me and I’m still dreaming to present it in a very big way.

LBB Who are your creative heroes and why?

CC> François Azambourg because I particularly like questions of movement. Patricia Urquiola manages to find a link industrial design, arts and crafts. My work resonates with this – it’s one of the components of my work methods.

Choreographer Anne Teresa de Keersmaeker also for all she provides. She instilled in me an intensity to tackle body movements in certain areas. I have a real passion for her work. There’s a sense of choreography when we sit on a chair, when we manipulate an object, when we move around a room between the furniture. Those everyday actions inspire my behaviour, and Anne Teresa de Keersmaeker transforms those gestures into a powerful language. I don’t know a lot about dance but I’m receptive to its practice. I have a lot of inspirations from contemporary art too – it’s where I’m originally from.

Check out more of his work at: http://cedriccanaud.com/