Music Piracy. Is it Stealing or is it Sharing?

Artists are invited to pick a side at www.ArtistsVsArtists.com 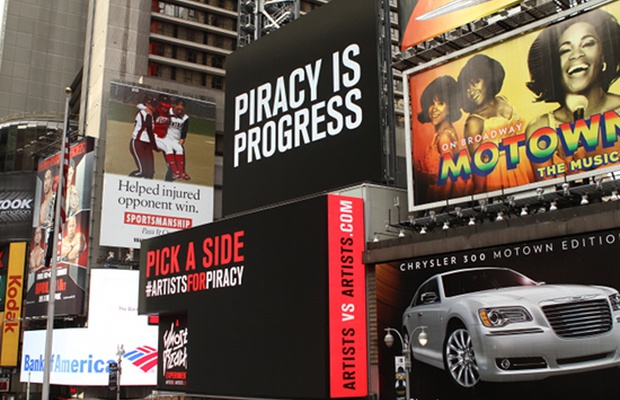 Upcoming, Brooklyn-based band, Ghost Beach, today launched a campaign, Artists vs. Artists, provoking the conversation among the music industry around piracy and what piracy actually means in 2013.
Is music piracy stealing or sharing? Is it helping artists or hurting them? Is it the future of music or the end? Ghost Beach is asking artists and music fans to pick a side – are you for piracy or against?
Billboards in Times Square will run for the next two weeks, driving people to the website www.ArtistsVsArtists.com and encourage people to take a stand by tweeting their support either #artistsforpiracy or #artistsagainstpiracy. The website will feature a count of those for or against and include real-time feeds of tweets carrying those hashtags. You can also ask popular artists and influencers their opinion direct from the site.
In addition, the website also gives you the option to do as you say – you can opt to download Ghost Beach’s new album for free or you can choose to purchase it via iTunes.
“Our hope with this campaign is to stimulate the discussion on exactly what 'piracy' means to different people. To an older industry sector, it's a dirty word that implies theft. From a younger, purely consumer standpoint it's another term for distribution. As it stands now, we're more closely aligned with the music consumer - in the sense that we are for free distribution as evident by our efforts thus far to make Ghost Beach original music available for free to fans,” commented the band.
They continued, “We think that working towards a digital retail/stream model, something similar to Spotify or Rdio, is the future of music. We subscribe to media futurist Gerd Leonhards 'music like water' philosophy that, one day, individuals will just pay a music bill - similar to their water bill, cable bill, electric bill - for unabated access. In this (hopefully attainable) Utopian music society, music will be available to consumers at a fare rate and artists/labels will be compensated with a fair royalty rate. In no way do we want to encourage theft of intellectual property, but we definitely support the idea of eased and more affordable distribution.”
The campaign billboard will run for two weeks from March 18, coinciding with the website launch and social media campaign.
The campaign was produced by TBWA\Chiat\Day New York.
Credits
GHOST BEACH
Band members: Josh Ocean and Eric "Doc" Mendelsohn
10K Islands, band management: Will Suter
TBWA\CHIAT\DAY NEW YORK
Chief Creative Officer: Mark Figliulo
Art Director: Mike Malz, Niklaz Lonnqvist
Copywriters: Spencer Campbell, Tom Greenwood, Brandon LaGanke
Designer: Ceara Teixeira
Producer: Joni Adams
Technical Director: Dima Farer
Lead Developer: Christian Ramirez
Studio Manager: Pasquale Bortone
Project Manager: Mimma Aliberti
Account Director: Hugo Murray
Publicist: Marianne Stefanowicz