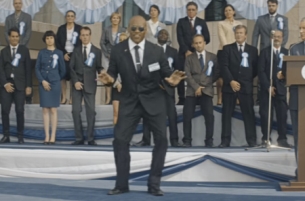 MoneySuperMarket is starting the New Year with a bang, by unveiling the third instalment of its award-winning Epic ad campaign. After the incredibly popular ‘Epic Strut’ from Dave and Colin’s ‘Wrecking Ball’, we’re now being introduced to Gary.

While working as a bodyguard for an election candidate, Gary is escorting his charge to the podium when news breaks that he has saved money at MoneySuperMarket. He can’t help but celebrate by busting into some epic dance moves in front of the crowd. The instantly recognisable dance anthem ‘Big Bad Wolf’ kicks in, just as Gary really lets himself go and throws out some even bigger shapes.

The crowd watches in awe as Gary continues to ‘pop ‘n’ lock’ and ‘wave’ through the static onlookers. A news reporter tries to interrupt Gary, who’s having none of it, shutting him down with a ‘talk to the hand’ gesture. The crowd, and even fellow bodyguards, soon begin to embrace Gary’s infectious dance moves.

For his grand finale, Gary performs a classic ‘scarecrow hip-hop wave’, slowly getting lower to the floor. Finally, the voice of newscaster Michael Buerk declares: “Gary, you’re so MoneySuperMarket”, before the final shot of Gary on stage with others doing a signature move incorporated into the ad by Michael Jackson’s choreographer, Vince Patterson.

Gary is played by Tony Wesley, who was part of the New York City Breakers, a legendary hip hop crew from the ‘80s that went from dancing on the streets of the Bronx to performing at the White House. Tony’s signature move, which you can see in the ad, led to him being renamed ‘Mr Wave’.

The 60 second ad will debut on Saturday 9th January with a key spot during Ninja Warrior on ITV at 7:30pm and will be amplified through a multi-channel, integrated campaign across PR, digital and social media, using the hashtag #EPICWOLF.

Miranda Roe, Brand Marketing Director at MoneySuperMarket, said: “We’re always looking for new and engaging ways to illustrate how ‘epic’ people feel when they save money at MoneySuperMarket. We’re hoping Gary will catch the public’s imagination as much as Dave and Colin before him, when he unleashes his inner ‘Epic Wolf’ and breaks into his iconic dance moves.”

Creative Directors Kyle Harman-Turner and Martin Rose from Mother London said: "We’ve had an epic bottom, an epic builder and now, an epic body popper. The next iteration of the 'You're So MoneySuperMarket' campaign combines a legendary street dancer from the 1980s with Michael Jackson's choreographer.

"Gary saved money at MoneySuperMarket and now he feels...EPIC. So epic that he immediately forgets his security duties, releasing his inner wolf. Howl. Howl. Hooowwwllllllllllll."