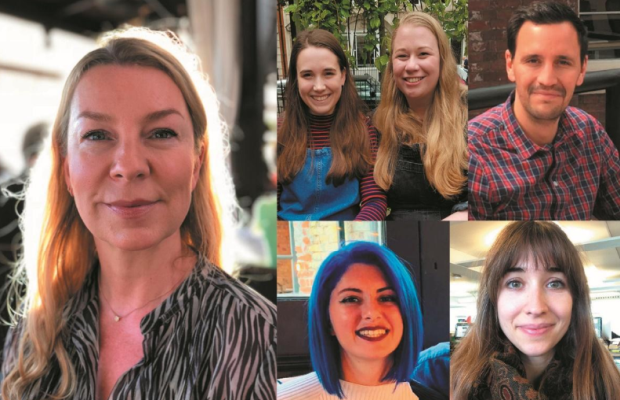 Alexa Gooder (left) is joining in the new role of head of partnerships in June, where she will head up the new Partnerships business unit, while Stuart Davis (top right) will take up the post of creative operations director at the same time. Hannah Mackenzie is joining M&C Saatchi as strategy director, alongside two new strategists Sara Barqawi and Carole Raber (centre and bottom right). And completing the line-up is new junior creative team Becky Brice and Sara Halliday (top middle).
Gooder’s initial focus for M&C Saatchi Partnerships will be to provide end-to-end partnership marketing for public and third sector clients before it expands to commercial clients. The department’s aim is to nudge behaviour change using the voices of brands and organisations people trust.
Gooder has worked with government clients for more than 16 years, including the Cabinet Office and Department of Health. She also held senior client-side roles at Thomas Cook and BT, and agency-side at 23red.
Reporting into M&C Saatchi managing director Tom Firth, Gooder joins from Fuse Manning Gottlieb.
Stuart Davies is also joining in June as M&C Saatchi’s new creative operations director, working closely with group chief creative officer Justin Tindall and managing director Tom Firth. Previously at Engine, he replaces Julia Cheetham, who left to join Apple earlier this year.
Davis will head up the creative production department, helping to define, plan and implement ongoing refinement of operational process across the agency.
Meanwhile, there are three appointments bolstering the planning department, with Hannah Mackenzie joining from Adam& Eve/DDB as M&C Saatchi’s new strategy director in July.
Mackenzie replaces Faheem Chaudhry who has been promoted to become managing director of M&C Saatchi South Africa.
Alongside Mackenzie, Sara Barqawi is joining from Ogilvy as a strategist, while Carole Raber joins from August Media to become senior strategist. Both will start in May.
Completing the hiring spree is the official appointment of new creative duo Becky Brice and Sara Halliday. The junior creative team were hired in April, following a successful creative placement, culminating in an outstanding anti-knife crime radio campaign.
The campaign, supported by The Ben Kinsella Trust, ran on Mother’s Day and featured real mums doing radio ‘shout outs’ to their sons, who they feared were carrying knives.
Giles Hedger, chief executive of M&C Saatchi, said: “These key hires reflect our momentum as an agency, our diversification as a business, and our ambitious agenda as a leadership team.”
The appointments come on the back of a record year of new business wins for M&C Saatchi. The agency took the top spot in the AAR’s new pitching league with a 90% conversion rate in 2018.