Why the Daniels Are Uniting Music Video Directors

Promo directors are connecting on social media to push for greater transparency and fairness, finds LBB's Laura Swinton as she chats to Daniels Kwan and Scheinert 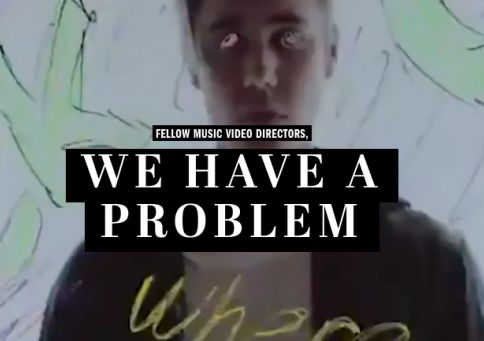 Daniel Kwan (one half of inimitable directing duo The Daniels, who are behind the likes of Turn Down for What and feature film Swiss Army Man) flicked out a post on Labor Day (September 3rd) highlighting the difficult and often unfair working conditions music video directors face… and the response from fellow filmmakers was overwhelming. Directors like David Wilson, Ian Pons Jewell and Norton chimed in with their support and #wedirectmusicvideos was born.

WeDirectMusicVideos will be, Kwan hopes, ‘a real, honest to god music video directing community’ – a website and network where filmmakers can support each other, share information and collectively push for greater transparency and change.

His directing partner Daniel Scheinert jokes that it’s the ‘alcoholics anonymous for music video directors’ – but beneath the jokes there’s serious reasoning behind the project. 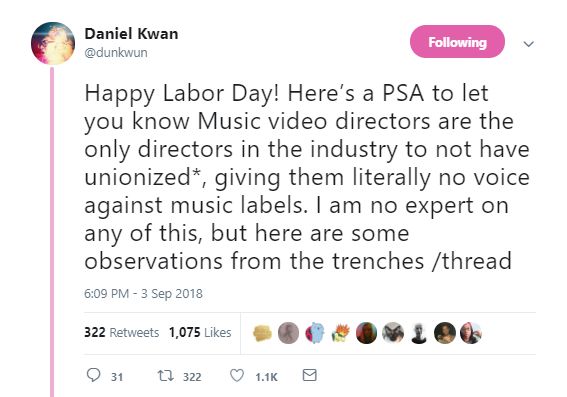 In the US, music video directors are currently the only directors who are not unionised (unless the budget is over $250,000… a tad higher than most promo productions, to say the least). Directors often forego a fee to bump up a meagre production budget. Pitching often lacks the rigour of the four- or three-way pitch seen in advertising production. And production companies and directors often accept these conditions as the price of building a reel and breaking into a more lucrative form of filmmaking. And while budgets for music videos have been low for many years now, platforms like YouTube have turned promos into a bona fide revenue stream.

The Daniels’ own epic promo, Turn Down for What, was a two-month project that earned the pair around $4 per hour. That same video is nearing 800 million views on the DJ Snake YouTube channel. The exact revenues earned on the platform are obscured and difficult to divine, but at a conservative estimate of ($0.0006 per view according to Information is Beautiful), it would generate $480,000 in revenue – although the real sum could be much higher.

The context and purpose of promos has also evolved. Music videos boomed in the days of MTV when labels found themselves with what was essentially millions of dollars’ worth of free ad space on their hands and created flashy mass-market commercials. These days a promo has to fight so much harder to find an audience – but when it does it becomes a revenue stream in its own right.

However, The Daniels are sensitive to the challenges that musicians and labels face as the music industry has struggled to find a new model in the digital world, given that they’re not necessarily pushing for a hard and fast cut of streaming revenue. Instead, they suspect that the real solution lies in something more nuanced. But the first step is to push for greater transparency.

“No one knows where the streaming revenue is going. It’s going to be really hard to fight for something if we don’t have the facts. Our worst fear is to ask for something unreasonable, to ask for things that are unrealistic because when that happens the whole thing falls apart. We might shoot ourselves in the foot, we might hurt allies in the process,” says Kwan thoughtfully. The last thing they want is to create an antagonistic relationship with commissioners or artists, but rather a more productive dialogue. The belief is that financial transparency should be beneficial for artists too.

The idea of unionising music video directors is one that they’re ambivalent about as it could squeeze out smaller directors who are trying to break in to the industry.

Ultimately WeDirectMusicVideos is still in its infancy. The site launched last week and the main focus for now is community building. They want to create a space where promo directors can hang out, connect, share stories and find support.

And what’s really interesting about what the Daniels are trying to do is the wider implication. At a time when the creative industries can’t stop talking about diversity, one of the main feeder pipelines for new directing talent is being closed off to those who can’t afford to work for free. It also taps into a conversation about the value of creative work, of artists’ time and skill and effort.