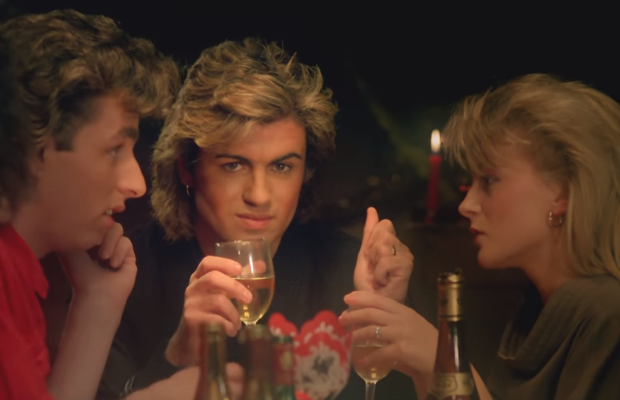 This year, Wham! are giving us something special. 35 years after the release of the Last Christmas music video, Wham!, Sony and legendary music video director Andy Morahan have re-released the alpine music video classic in astonishing 4K.
In order to achieve the exceptional clarity, the music video’s original film director Andy Morahan unearthed the original 35mm rushes and worked closely with teams at Cinelab London and Nice Biscuits to breathe new life into them.
To start the process, the team at Cinelab London had to take the original film rushes and scan them with a 4K scanner. The scanner turns the film into a digital file at which point it was sent on to Aidan Farrell at The Farm for the grade and then to Russ Shaw at Nice Biscuits for the edit. During the post production process Russ and his team ensured the film was clean and any damage was restored.
4K Re-release.

Original video.
Andy Morahan comments: “It was very strange for me to experience the film again in such sharpness. Over the years you get used to the softness of the original but we’re really happy with how it turned out. This project was particularly challenging as we only had 7 out of the 8 rolls of original film. This meant we had to blend 95% of the new footage with what was originally captured on Telecine. This is no easy task. Imagine trying to stretch an old tubular TV screen into widescreen. The image would get stretched and distorted. It's a similar principle taking old analogue scans and merging them with those from a 4K scanner. Thankfully, Russ at Nice Biscuits, Aidan at the Farm and Joce and Sonji at Cinelab have unrivalled experience in both analogue and digital technology.”

Russ Shaw, VFX supervisor at Nice Biscuits comments: “When Andy mentioned this was coming up, we literally jumped at the chance to get involved. It’s an absolute Christmas classic and having worked on several George Michael projects previously it was something I was very keen to help out on. However with only 7 out of 8 rolls of film and with the video consisting of many long dissolves in and out of shots, it meant we had to do careful work merging between the 4K newly re-scanned material back in to the originally finished video for the missing scenes. When the original film went through the telecine at SVC in 1984, the lens would have been very different from the precision produced lens used by Cinelab London today, so to get shots to mix over meant quite a fair amount of warping of the image in Flame to try and disguise this.”

Head of new business and restoration specialist at Cinelab London Sonji Clarke comments: “Our Restoration team were delighted to be asked to help on this project, we couldn't miss the opportunity to help to bring a new version of the film to life with all the stunning details on the film, which have never been seen before. Our task was relatively straightforward, the original film was in great condition and shot so well, Andy Morahan knew exactly what was needed. Cinelab London scanned 7 rolls of original 35mm at 4K on our DFT Scanity 4K HDR scanner and sent digital files (4K 16bit log dpx) - allowing for maximum flexibility in the grade - to Nice Biscuits for them to begin post-production. Our task was to ensure the beauty and details of the original film negative were captured in the very best way possible, future-proofed.”

“Last Christmas is one of the most iconic music videos of all time, the song a traditional favourite. As huge Wham fans, we all remember George Micheal at this time of year and it gave this project extra special meaning.”
The film premiered on YouTube on Friday 13th December with a Q&A with Andrew Ridgley and director Andy Morahan.

Celluloid Film: Burn It. Bleach It. Scratch It. How Destruction Can Result in Glorious Creation