Awards and Events 55 Add to collection

Black-tie fundraiser induction gala to support the club’s DEI programs on October 27, 2022 at Tisch Skylights at The Shed, Hudson Yards in New York 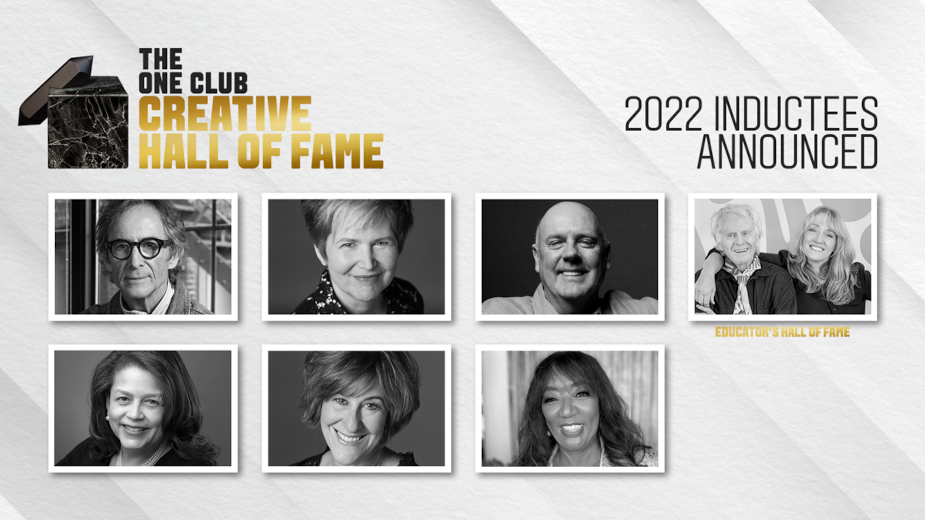 The One Club for Creativity, the world’s foremost non-profit organisation whose mission is to support and celebrate the global creative community, today announced the first group of advertising, design, marketing, and education innovators who will be inducted in the Creative Hall of Fame in October.

Additional inductees will be announced shortly.

The Creative Hall of Fame has a rich heritage of honouring the lifetime achievements of creative luminaries in all forms of advertising and design, starting with the induction of Leo Burnett in 1961.

The first group of new inductees are:

The black-tie Creative Hall of Fame induction ceremony, which is a fundraising gala to support The One Club’s many global DEI programs, will take place on the evening of October 27, 2022, at Tisch Skylights at The Shed, Hudson Yards in New York.

Inductees are nominated and voted on by The One Club Board of Directors. Criteria for being considered is three-fold:

Impact — Those who have a celebrated body of work.  This includes work that has been recognised as the best in the industry over multiple years for multiple brands, can be considered truly innovative and original in thinking and execution, and has an undeniable lasting impact.

Influence — Those who have used their creativity and leveraged their resources to advance the industry and serve the greater good.

Inspiration — Those who have had a measurable, positive effect on the next generation of creative leaders, and are known industry-wide as mentors, door-openers, and opportunity-creators.

“The Creative Hall of Fame is the ultimate recognition of a storied career of a visionary creative professional,” said Kevin Swanepoel, CEO, The One Club. “This first group of 2022 inductees has transformed the industry, uplifted underrepresented groups, and continues to inspire the next generation of creative thinkers and doers.”

Additional inductees will be announced shortly.  Event and ticket details, as well as bio information on this year’s inductees, is available here.