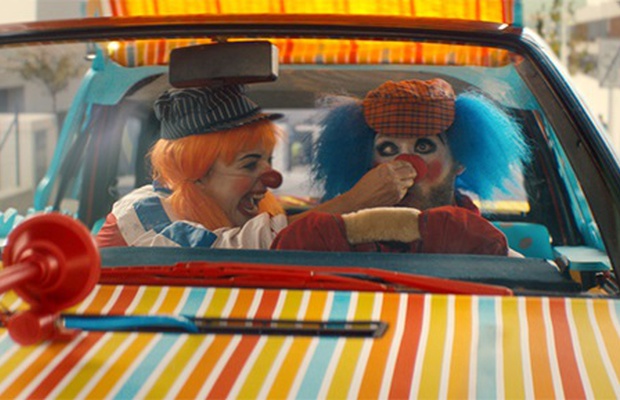 The Film Craft Lions celebrate onscreen artistry - work in which technical skill and prowess in production elevates an idea or dramatically enhances its execution. During the 2018 Cannes Lions Festival of Creativity, String and Tins, Rattling Stick and Audi each collected the coveted awards for their work on the ‘Clowns’ campaign devised by BBH.
Directed by Ringan Ledwidge, the film was released in October 2017 to promote Audi’s ‘Clown Proof’ technology. A host of clowns cause havoc on the streets but Audi’s hi-tech safety capabilities mean all calamities are avoided.
As the film was shot without on set sound, the team at String and Tins played a key role in re-building the whole soundtrack from the ground up: all clown character voices, door slams, squeaks, rattles, engines, skids, cable plucks, light bursts, balloon movements and atmospheres had to be created from scratch.
The sound was recorded in various locations in the UK, from The Foley Barn in Knebworth to motocross tracks in Buckinghamshire. The Foley played a key part in bringing the cars and action to life in the film, in part to make the Clowns and their vehicles seem as ruinous as possible. Will worked with long-time collaborator Julien Pirrie, recording everything from violent shaking of buggies, rattling pipes and TV aerials, scattering 300 ball pit balls around, all cloth and feet moves, to some metal work with various elements of Julien’s extensive props collection. Will then brought the recordings back to String and Tins to fit into the atmospheres and other effects that were best created at HQ or sourced from libraries.
Lead sound designer Will Cohen comments: “This was a real passion project for us, we worked damn hard on bringing the story to life while being sensitive to the dynamic and shape of the music… so we’re pleased to have been recognised for our contribution.”