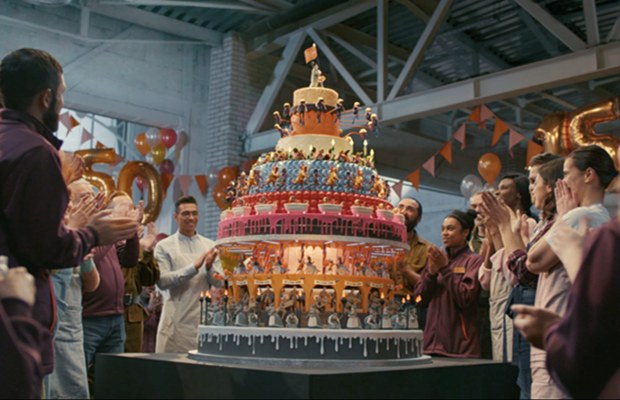 Sainsbury’s has revealed its campaign to celebrate the supermarket’s 150th birthday this year, with the TV advert broadcast for the first time during Britain’s Got Talent on May 11th.
The advert follows the creation of a cake that embodies the supermarket’s values and heritage over the last 150 years. Each tier represents contributions from Sainsbury’s colleagues, from the opening of the very first store on Drury Lane, set up by a newly married couple, Mary Ann and John James Sainsbury in 1869 to provide one of the poorest areas of London with good value, quality food, to more recent initiatives like the retailer’s 20-year partnership with Comic Relief which has raised over £130 million.
A combination of model making, 3D printing and traditional sugarcraft techniques were combined to create the cake, which uses a zoetrope technique to give the illusion of an animated moving image. The zoetrope technique was one of the earliest forms of animation, invented in the early 1800s and still popular at the time of Sainsbury’s founding in 1869.
The top tier of the cake was created by Californian pastry chef, Claire Ptak, who baked the wedding cake for Prince Harry and Meghan Markle in 2018. The Citrus and Blossom cake will be on sale in Sainsbury’s cafés across the UK from 20th May for nine weeks.
Key milestones and events from the supermarket’s history which are brought to life in the advert include:
· During the First World War, Sainsbury’s pledged to keep all colleagues’ jobs open until they returned from battle. In the meantime, the supermarket employed hundreds of women to continue serving customers – a key milestone in the supermarket’s long-standing commitment to diversity
· Sainsbury’s colleagues coming together in the 1960s to fundraise and host Christmas parties for disabled children in an Essex school, which later became an annual event
· Sainsbury’s long-running partnership with the Woodland Trust, which has helped the charity to plant three million trees, including establishing a special Sainsbury's wood at The Queen Elizabeth Diamond Jubilee Wood in Leicestershire
Laura Boothby, head of broadcast marketing at Sainsbury’s, said: “Community has been at the heart of our business since 1869 and we are delighted to bring to life the achievements and dedication of our colleagues in our 150th campaign. Sainsbury’s has always had a focus on contributing to the communities we serve and we’re proud that this is a legacy that still stands today.”
The campaign kicks off Sainsbury’s 150 Days of Community initiative, which sees its 180,000 colleagues from across the Group being invited to volunteer for a cause in their local community. From river and beach cleans, to organising days out for those in need, Sainsbury’s colleagues will come together in teams to continue the legacy of community contribution that has always been a part of the brand’s values.
The advert, created by Wieden+Kennedy London, features two current Sainsbury’s colleagues, Krissie Atkin, customer services assistant in Darwen with over 20 years’ experience and Joel Narraway, logistics manager at Rye Park Depot who has worked for the supermarket for five years. During filming, Krissie recreated a charity fundraiser of sitting in a bath of baked beans whilst Joel re-enacted a colleague’s attempt at a fun run dressed in a chicken suit. Claire Ptak is also shown in the TV advert baking the Citrus and Blossom cake she created for the retailer.
Dan Norris and Ray Shaughnessy, creative directors at Wieden+Kennedy London, said: "Making Sainsbury’s history come to life via the medium of a zoetrope cake was quite the challenge (massive understatement) but it truly is fitting of such a big birthday. Lucky we had Noah onboard; the team couldn’t be prouder of the work."