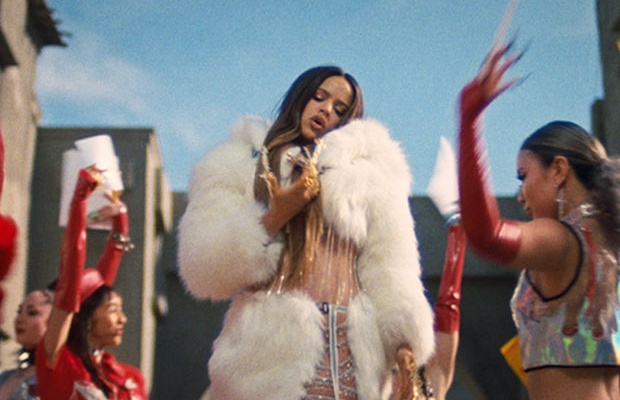 PRETTYBIRD directors Bradley & Pablo have debuted the new music video for Latina superstar Rosalía’s latest single ‘Aute Cuture.’ This is the singer’s first music video release since her recent collaboration with J. Balvin and El Guincho, ‘Con Altura,’ two months prior.
Set against the backdrop of a lackluster Spanish border town, the film captures a nomadic sisterhood of manicured gangsters, running a local nail salon by day and crafting illicit business deals by night. Adorned in gold embellishments and skin-tight, patent leather outfits, Rosalía acts as the boss of the salon as well as the fearless leader of the Beauty Gang. Their bedazzled stiletto nails and spiked jewelry, combined with Charm La’Donna’s playful yet menacing choreography, culminates into the group’s overall aura of danger.
‘Aute Cuture’ particularly demonstrates Bradley & Pablo’s ability to seamlessly mix genres, namely Western and gangster, to create highly vibrant imagery that is simultaneously as glamorous as it is gritty.
When developing the story alongside Rosalía and her sister and frequent collaborator Pili, Bradley & Pablo were inspired by the singer’s relationship to her nails, the feeling of power that they instill in her while she is performing. In this film, the directing duo explores the idea of nails as “mystical talismans,” magical vessels for female and feminine empowerment.
The Los Angeles-based British filmmakers have previously collaborated with pop music icons such as Kanye West, Dua Lipa, Migos, Nicki Minaj, and Charli XCX.