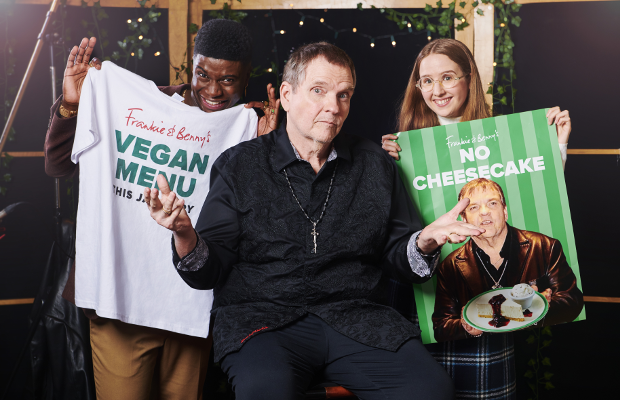 MEAT is out, VEG is in this January - just ask a global rock icon who has sold over 100m album copies worldwide.
That's right. Guaranteed to be the biggest collaboration of 2020, legendary American singer MEAT LOAF is teaming up with Frankie & Benny's to back VEG throughout Veganuary in a hilarious new online video.
The campaign idea was devised by newly launched creative consultancy Idea Farm, founded by former Paddy Power PR man Lewis Davey. The script, creative and production was handled by Lucky Generals.
Plant-based dishes now make up a significant portion of Frankie & Benny's sales, and January see the launch of eight new entries on the menu including Vegan Loaded Skins, Vegan Hot Dog, and the Calzone Vegano - joining Frankie's Vegan classics like the Viva la Vegan Burger, Plantball's Italiano, and the No-cheesecake.
But would Meat do anything for love veg?
The new video, which will be released across Frankie & Benny's channels, and supported through paid-for media and a big PR push, shows Meat, being persuaded by his team of minders to rebrand himself as 'VEG LOAF' to launch Frankie & Benny's new vegan menu. But convincing one of the best-selling performers of all time proves tricky business in the tongue-in-cheek video, as Meat rebuffs the rebrand through a hilarious series of vignettes.
So, he won't do that... but that isn't stopping Meat endorsing Veg at Frankie's this month.
Meat said: "When Frankie & Benny's first approached me to rebrand to Veg Loaf I said no way in hell - I won't do that. But, I'd do anything for our planet and dropping Meat for Veg, even for just one day a week, can make a huge difference which is why I'm backing Frankie's new vegan menu. I've had a sneak peak at the new menu, and after hearing you folks went crazy over a vegan sausage roll last year, I know you'll love this."
To celebrate the rockstar collab', Frankie's is offering the nation 50% off Vegan mains from the 5th - 31st January 2020.
Lewis Davey, founder and creative director at Idea Farm, said: "Landing your first big piece of creative work with a global icon like Meat Loaf is as rock n' roll as it gets. We're big fans of the power of unlikely alliances between brands and talent, and we're delighted to have delivered this one for Frankie & Benny's. Credit to our clients at TRG for being brave and ambitious enough to do it - and it was a pleasure to team up with brilliantly talented team at Lucky Generals. Hopefully this is the start of a big 2020 for Idea Farm.
Chris Goulder, director at Lucky Generals, said: "We normally like a meaty challenge but it's always nice to have a nibble at something different. This was a fun way to make a serious point about an important issue, so it's a great way to start the New Year."
Elise Ash, director of strategy and brand Frankie & Benny's, said: "We wanted to encourage diners to swap Meat for Veg this January, so who better to sign up than one of the most recognised artists on the planet. Funnily enough, our new video isn't far off the original real-life pitch to Meat. While we couldn't convince him to rebrand to VEG LOAF, we're delighted he's the headline act for our new vegan menu and help spread the word on the benefits of tucking into our meat-free dishes. Credit to the guys at Idea Farm and Lucky Generals for bringing this campaign to life - we love it."