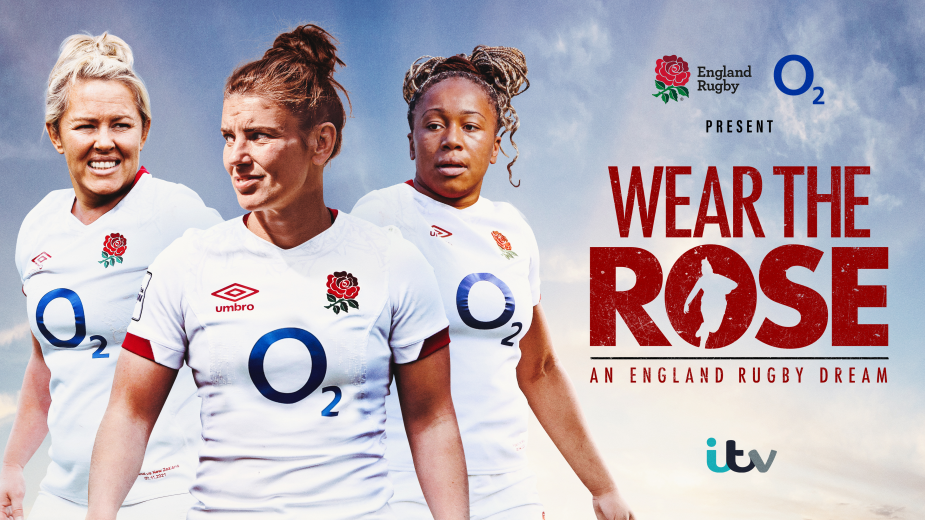 O2 has today launched ‘History is being written,’ a new integrated campaign engineered to rally support and awareness of England’s women’s rugby team, the Red Roses, who are set to take on the world’s best in New Zealand over the next six weeks.

The Red Roses have recorded 25 consecutive victories, the most of any male or female rugby team in history, and look set to build on what has been a hugely successful year for women’s sport in England with the Lionesses’ European Championship win in the summer.

As part of O2’s partnership of England Rugby, now in its 28th year, the mobile operator has pledged to equally fund the men’s and women’s teams.

This investment has seen them commission a two-part documentary, Wear the Rose: An England Rugby Dream, which aired on ITV earlier this week (available on ITV Hub), and shows the hard work and dedication it takes to wear the rose with exclusive and never before seen footage.

O2’s social-first ‘History is being written’ campaign – supported by UK agency, VCCP London, as well as M&C Saatchi Sport & Entertainment – wants to educate and inform the English public on how good this team really is and why they should all be setting their alarm clocks (games in New Zealand will start as early as 3am throughout the tournament), switch the kettle on, watch their matches and show their support.

To achieve this, O2 has created a range of video and picture-led content, which includes player profiles and interviews as well as fun challenges that show a more playful side to the team, which will feature across all of its social media platforms including Instagram, TikTok and Twitter.

Throughout the Red Roses’ campaign in New Zealand, O2’s hugely popular O2 Inside Line content series, will provide fans with exclusive behind the scenes access and the latest news from inside the team’s camp.  This will include live streams via England Rugby’s social channels to help connect fans with the players even though they are on the other side of the world.

In its wider support of the Red Roses, earlier this summer, O2, through Priority, organised an open training session at Twickenham Stadium which gave the British public a rare opportunity to watch the Red Roses train and meet the players and pose for selfies.

As part of O2’s campaign, it will also be looking to drive greater attendance at future Red Roses games, including giving its Priority users exclusive discounts on Red Roses tickets for the TikTok 2023 Women’s Six Nations with the team playing France at Twickenham Stadium for the first stand-alone Red Roses fixture.

Gareth Griffiths, Director of Partnerships and Sponsorships at Virgin Media O2, said: “The Red Roses are one of the best performing teams currently in world sport and we want everyone to know about them. Over the next six weeks, O2’s social media platforms will be sharing original and engaging content to highlight these incredible athletes and personalities. We’re calling on the English public to Wear the Rose, get behind the team and show their support to cheer them on to greatness.”

Ben Hopkins and Morten Legarth, Creative Directors at VCCP, said: “It takes a brand like O2, who has been such a steadfast partner of the Red Roses to connect the whole country to these incredible athletes and to help get them the recognition and support they deserve. What we love about this campaign is that we’re able to show how this remarkable team are not just writing history for rugby, they’re building on the unstoppable momentum that is changing the perception of women’s sport all around the world. History is being written. Come on the Red Roses!”

Jenny Mitton, Director and Women’s Sport Lead M&C Saatchi Sport and Entertainment, said: “O2’s commitment to parity spend in 2020 was a ground-breaking move in women’s sport and sent a clear message that the mobile operator was setting out to use its Wear the Rose platform to drive genuine change for the women’s game. Wear the Rose: An England rugby Dream has given the Red Roses mainstream visibility on ITV and throughout the tournament O2 will make this team unmissable when they flood social media with their stories. O2 back this team, and so should you.”