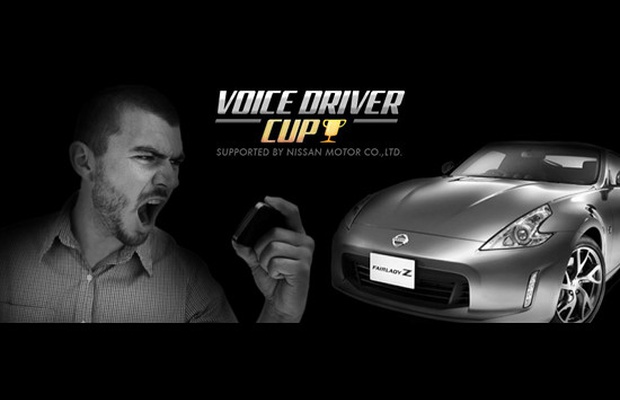 In cooperation with Nissan Motor Co., Ltd., the VOICE DRIVER Production Team has developed the world’s first motor sports VOICE DRIVER, making it possible to drive a car using voice commands alone. The concept was made a reality in a one-year production effort to bring the enjoyment of motor sports excitement to everyone, young and old alike. All you need to enter the race is your voice. No complicated driving operations are needed as the volume of your voice is translated directly into the car’s propulsion. The race cars were developed based on radio-controlled four-wheel-drive models. Running on voice-controlled motors, the racing cars will speed around a 60m course. The auto body used is that of Nissan’s flagship FAIRLADY Z sports car. This is a race game that enables anyone to enjoy the FAIRLADY Z driving experience.
In commemoration of the game’s development, on November 10 (Sat.), the VOICE DRIVER CUP Japan Grand Prix voice-driven motor sports championship will be held at Nissan Global HQ Gallery in Yokohama.
One week later, on November 17 (Sat.), the VOICE DRIVER CUP World Grand Prix will be held on the Web at: http://cup.voicedriver.net
This time-limited 24-hour race will enable PC user contestants to join in the race using their computers. Also, in conjunction with these VOICE DRIVER CUP races, the VOICE DRIVER iPhone app will be distributed for free to enable users to enjoy the world’s first voice-controlled driving game to hone their voice driving skills. This is a fully developed racing game created with the cooperation of Bandai Namco Games, creators of the Ridge Racer racing game series. All you need to participate in the VOICE DRIVER CUP races is your voice and a passion for motor sports.
Second VOICE DRIVER World Grand Prix @Web 17 November 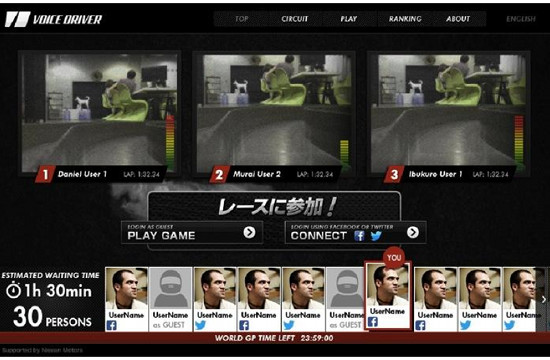 Race overview:
- People around the world will be able to join in, competing through their PCs to find out who has the “fastest voice
in the world.”
- Participating through USTREAM with voice commands entered through PC microphone, they will be able to
remotely operate (specially designed radio-controlled) FAIRLADY Z cars racing at a track in Tokyo.
- To make it easier for people all over the world to join in, the event will be operated on a 24-hour basis.
- Race Date/Time: From 7:00 p.m., November 17 (Sat.), through 7:00 p.m. November 18, 2012
- URL :http://cup.voicedriver.net
- How to participate:
- Access the URL listed above.
- Log in through a facebook or twitter account. (Guest log-in is possible without an account.)
- Wait your turn to join in, then when your turn comes up, just speak into your PC microphone and go…
Free VOICE DRIVER voice racing game iPhone app
Developed to enable users to enjoy voice driving any time, any place, VOICE DRIVER is the world’s first iPhone racing game enabling users to drive solely through voice commands. Just face your iPhone and call out to move the Nissan FAIRLADY Z. Say “Vroom!” into your iPhone, and your voice becomes the accelerator, moving the car. Watching the speedometer and tachymeter, modulate your voice to control your speed and compete for the best racing time. Developed in cooperation with the Bandai Namco Games design team that created the Ridge Racer series, this game is the real deal. The app is available for download on 10 November 2012 and will be free of charge.
Credits
Sponsor: VOICE DRIVER Production Team
Cooperation: Nissan Motor Co., Ltd.
Planning: TBWA\HAKUHODO
Production: Kayac Inc.
App development: Bandai Namco Games, Ltd.
Video production: AOI PRO
Creative Director: TBWA\ HAKUHODO - Takayuki Niizawa
Copywriter: TBWA\ HAKUHODO - Kenta Ikoma/Kenya Takao/Naoto Ichikawa
Art Director: TBWA\ HAKUHODO - Shawn Schrader
Interactive Producer: TBWA\ HAKUHODO - Takuma Fujii
Experience Designer: TBWA\ HAKUHODO - Kaname Aratame
Web Director: Kayac Inc. - Hideki Sugimasa/Fukatsu Yasuyuki
Device Engineer: Kayac Inc. - Koki Ibukuro/Fumitaka Kimizuka /So Matsuda
Technical Director: Kayac Inc. - Takashi Murai/Mitsunari Sugiyama
Web Designer: Kayac Inc. - Daniel Marcos Perujo
Movie Producer: AOI Pro. - Keisuke Mizusako/ Naofumi Nakamura