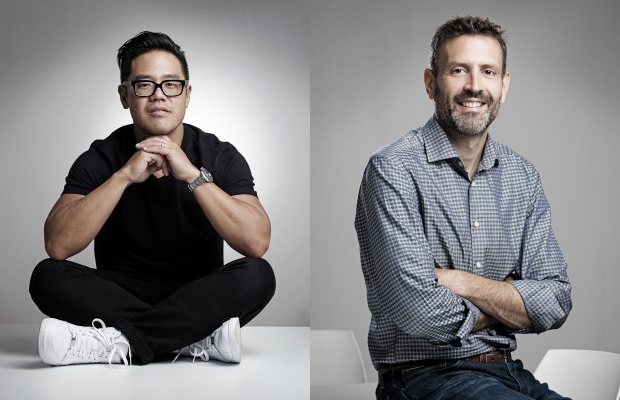 Photo, left to right: Conan and Ben
Nissan United Europe, the multidisciplinary unit within TBWA that directs Nissan’s marketing and communications, has hired Conan Wang as executive creative director and Ben Evans as managing director.
Both Conan and Ben will work alongside Ewan Veitch, president of TBWA\G1 and Nissan United Europe. Nissan United is an agency unit that combines creative storytelling with unprecedented levels of data acumen — aided by the incorporation of Omnicom's new industry-leading data platform, Omni — to form the world’s most creative precision-marketing automotive team.
In his role as executive creative director, Conan will be responsible for overseeing multiple Nissan creative teams across TBWA’s European offices, raising the overall creative bar and embarking on a new era of data-inspired creative.
A two-time Emmy Award–winning creative, Conan was most recently global executive creative director at CAA Marketing where he led creative for companies such as AB InBev, Activision Blizzard, Canada Goose, Coca-Cola, Diageo, Dolby, Fender, GM, Marvel Studios, Motorola, Southwest Airlines, Unilever, and Warner Bros.
Prior to CAA, Conan was creative director at Wieden+Kennedy Shanghai, managing the Nike Greater China and Chrysler Asia Pacific businesses in over 21 countries. In this role, he also led a variety of strategic new business pitches across Asia and North America, and helped grow the office from a staff of 40 to 150.
Chris Garbutt, global chief creative officer of TBWA\Worldwide, said: “I'm thrilled Conan has joined our global creative collective. With his incredible talent and diverse experience, he has what it takes to disrupt and create category-of-one work. The world needs creativity more than ever and it's vital that we attract the world's best talent to lead our clients’ brands. With Conan on board and with Ben as managing director, we’ve got some of the industry’s best to help Nissan capture a larger share of the future.”
As managing director, Ben will help lead Nissan United in Europe, with a focus on operationalizing Nissan United’s precision marketing offer and serving as advisor and counsel to Nissan management teams across the region.
Ben joins TBWA from Ogilvy & Mather, where he held multiple roles across the agency’s global offices, most recently in London running Ogilvy’s Digital and Customer Experience relationship with Nestlé, where his responsibilities included supporting the definition and rollout of Nestlé’s approach to personalization at scale across all brands globally.
Ben also led Ogilvy’s South Africa offices as managing director of Digital, where he set up a number of new-to-market capabilities following his 2014 arrival. He first joined Ogilvy in 2010 to head up digital as managing partner at OgilvyOne London.
Both Ben and Conan will work alongside a core team based in Paris, with local agencies and creative hubs all over Europe.
“We are thrilled to welcome Ben and Conan to the TBWA and the Nissan United team. Both Ben and Conan had creative track records and global experiences  that made them an ideal match for leading innovative work as we continue to raise the bar for Nissan’s communications,” said Ewan.