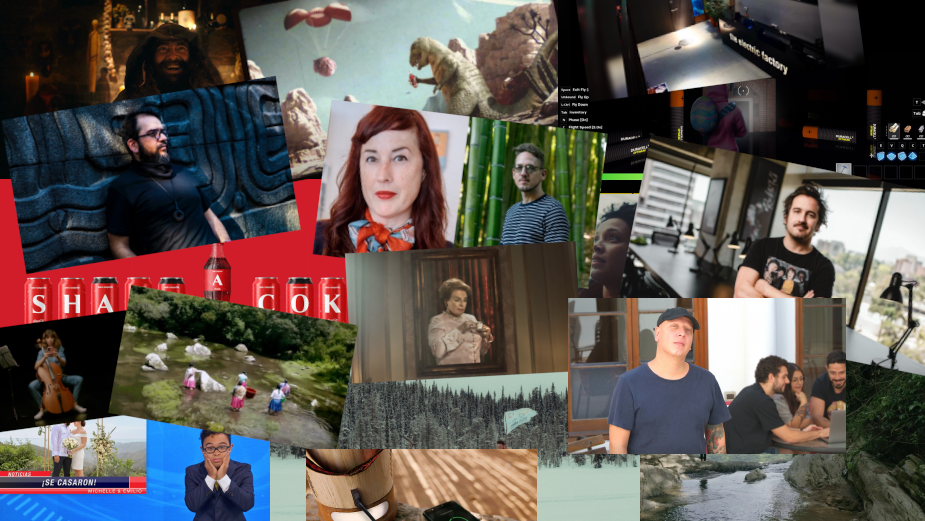 Fearing that I may be in danger of repeating my colleagues, who all this week have been rounding up the most-read articles from across the globe, I will only briefly pause to express my shock at just how quickly 2021 has come and gone. Myself and Americas editor Addison Capper - who curated this wonderful North America highlights reel on Tuesday - only took over editorial LATAM duties relatively recently, but we have already become familiar with the outstanding quality and creativity of the projects being produced in the region.

So, this collection of top-viewed South American stunners has been as much of an education for myself, as it is a brilliant summary for all of you to peruse at your leisure, as we come to the year’s end. I know that creating this list has fuelled my intrigue for the outstanding campaigns and innovative Latin American teams we on the Americas team will be writing about throughout 2022, so I hope that you can join me in celebrating the stories from 2021 that drew the most eyeballs.

Coca-Cola's Lettered Bottles Express the Hope for a Better 2021

Starting our tour of Latin American work with one of the most creatively revered countries in the region, Brazil, we’re kicking off with a Wunderman Thompson Brazil campaign that allowed young people to interact with Coca Cola’s marketing like never before. A natural development from the soda giant’s ‘Share a Coke’ campaign - where names were put on cans and bottles of Coca Cola - WT Brazil and Coke’s ‘Alphabet’ campaign puts letters on the products to “inspire people to express their best feelings, thoughts, wishes”.

Through the Eyes of an Astronaut, Johnnie Walker Unveils a Future of Possibilities

In a grand-scale production for Johnnie Walker, AlmapBBDO told a story inspired by John Olivas, an astronaut who experienced isolation in outer space. Carrying a message of optimism and the whiskey brand’s ‘Keep Walking’ motto, the spot celebrates Johnnie Walker’s 200th anniversary and promises a world of celebration and positives ahead, after the isolated year of 2020. Although many of us are still awaiting this future as we enter 2022 - the film is still a rather heart-warming watch.

I know. This is a little confusing. But here we go… The creative agency is from Brazil. They are called Africa. And they created a campaign for a small town in Finland. Now that geographical tongue-twister is solved, we may proceed. This is a personal favourite from the year - the Finnish arctic town of Salla made a bid for the 2032 Summer Olympic games to show the impact that global warming is having on their climate. An ingenious concept from Africa that has sarcasm dripping from every line and an important message at its core.

Behind the Work: Comedy Horror Campaign Explores the Hocus Pocus of House Hunting

Inspired by a desire for increased space during the pandemic - those of you who had to share a house with a self-isolating individual will understand - Together-w created a hilarious spot for online real estate platform Inmuebles24. LBB’s Laura Swinton went behind the scenes of this homage to ‘80s camp horror comedies and got some equally funny responses from CCO Lulo Calió.

Another comedic Argentinian spot among the region’s top viewed stories, Grey Argentina is behind this film that highlights the difficulty and pitfalls of organising bank payments in busy WhatsApp group chats. Directed by Augusto Giménez Zapiola and Martín Holzman from Argentinacine, the piece excellently displays the need for the unique new product and provides a few 'jajajas' along the way.

Another Coca-Cola story, but this time coming from Argentina’s Mercado McCann, these comedic, 15-second spots were part of a huge, energetic campaign for the launch of the new Coke Zero Sugar recipe. The funny films - featuring an argument between a dinosaur and a meteorite, as well as a quarrelling ventriloquist and puppet - convince you to “try it first” and decide if the new coke zero is the best coke yet.

Responding to the statistic that 840 million people go without electricity every year, Wunderman Thompson Colombia helped design and develop WaterLight - a device that uses salt water to generate electricity through ‘ionisation’. Created with the Wayúu people in mind (an indigenous Colombian community with limited access to electricity) this piece of real-life magic will absolutely blow you away. With WaterLight you can even charge your phone, using the ocean as a battery - it brings a whole new meaning to hydropower. It’s a perfect combination of creativity, technology and humanity that is more than deserving of its spot as our most-read Colombian story.

Travels in a Former War Zone: How Chevrolet Brought ‘Finding the New Roads of Colombia’ to TV

After being stuck inside and prohibited from travelling for so long, a bit of escapism is just what the doctor ordered. And what better way of escaping than a good travel doc? Finding the New Roads of Colombia is a documentary, created by Commonwealth/McCann Colombia that explores Caquetá, one of the Colombia’s most biodiverse, least explored and potentially dangerous regions. Using Chevrolet’s 'find new roads' purpose as inspiration, the Colombian agency created an ambitious branded project that took two years to make. This interview delving behind the creation of the documentary is well worth the read.

I would be lying if I said that there wasn’t a certain pride in seeing a piece of our own editorial work championing the team amongst the highly viewed collection of celebrity-filled news stories, important announcements and awards results. This feature is our editor-in-chief Laura Swinton in conversation with Wunderman Thompson Chile’s VP of creative Samer Zeidan. They discuss how punk opened up Samer’s love of writing, Chile opening up to social justice and why Sponge Bob is a creative hero.

Earth Day: Why It’s Time to Green The Bid

2021 was a big year for sustainability -  and among the companies going green for the environment is Chile’s The Roots Production Service. In this feature, The Roots’ Ariel León Isacovitch and Hype’s Jessie Nagel spoke with us about founding and supporting ‘Green the Bid’, a collaborative platform that brings together resources, ideas and advice for improving the sustainability of productions.

It’s 2021 and the videogame-brand collab machine that is Fortnite is still going strong. If it’s not Balenciaga, it’s Marvel super heroes, virtual Marshmello concerts or the characters from Dune - all added to the world’s most popular battle royale game. This collaboration between Duracell and Fortnite saw a ‘speedrun’ course be created for players to compete in and collect ‘power and duration capsules’ to save the island. Perhaps not as exciting as wielding Thor’s hammer or getting ‘victory royales’ as Lebron James - but Fortnite’s eye-drawing ability is evident, as this campaign from Wunderman Thompson Mexico was the most viewed story from the country.

A bold statement in the headline of this interview with Wunderman Thompson Mexico’s chief strategy officer helped attract hundreds of our readers to this story. This deep dive into the experienced strategist and his thought process is an essential read for aspiring strategists, exploring Pedro Lopez’s “gut-inspired, data validated” approach.

Fahrenheit DDB created three TV spots for Bell’s, the own-brand for Peruvian supermarket chain Plaza Vea, all of which contemplate theories behind different product’s value prices. Featuring strawberry-eating cows and child CEOs, this entertaining spin on the classic product ad got people interested and landed itself in Peruvian pole position.

Completing a one-two at the top of the Peruvian charts is this campaign from Fahrenheit DDB which produced a soap that removes pollutants from rivers as well as cleaning clothes. This ingenious product was also made publicly available as the formula for the soap is accessible for governments, soap manufacturers and non-profits to use. This deservedly popular campaign created a whole new product and solved a pressing issue that affects Peruvian communities and 159 million people globally.

“Digital Before It Was Cool”: How the Electric Factory Is Leading Innovation in the USA from Its Home Country

The most read story from Uruguay this year is this interview with co-founder of the Electric Factory, Juan Ciapessoni, for our ‘Company Profiles’ channel. Juan discusses how they developed the Uruguayan production company from its inception in a pre-digital era, to a leading digital creativity hub and a serious international player in the digital innovation and advertising sector. An insightful retrospect on Electric Factory’s growth to date, filled with juicy knowledge and advice.

We could all do with a bit of light-hearted news after the last couple years of seemingly never-ending negativity. Luckily, this ray of sunshine from the beginning of the year is set to warm you heart and put a much-needed smile on your face. Sajo // McCann partnered with the Puerto Rican Down Syndrome Foundation in January to launch 'The Happiest News Report' a campaign of news reports that is nothing but puppies, weddings and people finding their dream jobs. It’s the perfect antidote to what - let’s be honest - has been a pretty depressing time for many people.

Bossing It: Fede Ahunchain on Why the Most Important Asset You Can Have is Trust

Creative agency Rocknrolla, quite frankly, dominated the top stories from Guatemala in 2021 and this ‘Bossing It’ feature with creative director Fede Ahunchain came out on top. The young CD gives some stellar advice on navigating leadership in the industry and candidly opens up about his weaknesses amongst other aspects of his career.

For Planet and Pocket: Marketing in the Make Do and Mend Economy