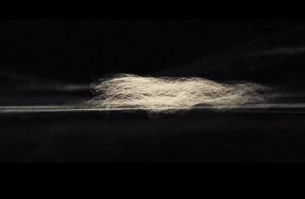 Mill+ worked with Charlie Simpson’s latest band Once Upon a Dead Man to create the music video for their new single ‘Threads’.

Once Upon a Dead Man is made up of the three Simpson brothers, Edd, Will and Charlie alongside long-time friend Simon Britcliffe who approached Mill+ with the open brief of creating a music video for their new track ‘Threads’ from their debut EP ‘Concepts and Phenomena.’

Directed by Grant Berry, Raj Davsi and Will Denning, the team produced the six-minute promo video in just over three weeks.

They immediately felt the track lent itself to a dreamlike visual quality and so concept frames, along with 3D animation tests in C4D for the desired tone were created before being presented to the band and put into production.

The creative treatment of the film compliments the track’s title and plays off the idea of threads as the visual inspiration, which form and grow throughout. A key lyric in the piece is ‘Black holes consume the largest stars’ which is represented in the form of a whirlpool, and intensifies in motion as the piece progresses, creating a mesmerising state.

Mill+ Creative Director Grant Berry commented; “The idea was to play off light and dark as the threads form, becoming stronger, reflecting the lyrics and pace of the track. We wanted the environment at first to appear more barren and unanswered. To achieve this, the threads animate over the surfaces, revealing more of the environment as the track progresses.

We really liked the idea of two hero characters in the piece: the whirlpool and illustrative ‘cat’. Animated in Maya and then imported into C4D, the stylised image of a cat acts as the primary light source with both the particles of light and thread weaves growing stronger during the course of the spot, taking the viewer on journey across vast open landscapes and seemingly continually evolving environments.”

Mill+ Motion Designers Will Denning and Raj Davsi explained; “We worked with a combination of C4D and Xparticles to achieve an illustrated look and for some shots used the particle painter tool which gave us excellent control over the look and feel of the landscapes. Xparticles also allowed us to create complex simulations in a short amount of time. The fast and controllable depth of field settings within VRay also meant we were able to achieve some great macro and illustrative shots in the piece."