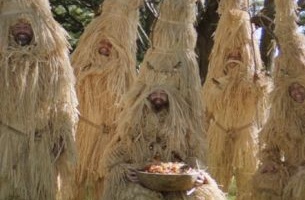 Confectionery brand Black Forest debuts “So Juicy, Ja!,” a new creative campaign that brings the brand to life by introducing The People of The Black Forest; a previously unknown Anglicization, nestled in the verdant green forest, who have built a community around harvesting land fertile with deliciously juicy gummies and fruit flavoured snacks.
Through the reverence and traditions of the people of The Black Forest, the “So Juicy, Ja!” campaign showcases what makes Black Forest so special – deliciously juicy products made with real ingredients.
Created and produced by Joan Creative, who has also developed content for Netflix, Adidas, General Mills, Gallo and more, this “real but not real” culture is one of ages past; an untouched community of friendly people, content with an uncomplicated way of life, of which gummies are a central part. “While the typical candy advertisement is usually too loud, brash and fast-paced, ‘So Juicy, Ja!’ provides a welcome relief with a subtle approach full of nuanced detail and humour that creates a unique piece of entertainment on its own,” said Elena Sukacheva CMO of Ferrara Candy Company, parent to the Black Forest brand.
"We wanted to create a whole, fully realised world of the Black Forest; one that is full of things that could never truly happen, but grounded and treated in a very serious way, with reverence for its place and people,” said Dave Canning, Executive Creative Director at Joan Creative.
The “So Juicy, Ja!” campaign will be distributed digitally, socially, and on televisions nationwide beginning in April 2018. The customs and traditions of The Black Forest will be further explored in a partnership with Lonely Planet, facilitated by creative media agency Noble People, as well as various events throughout the Summer.