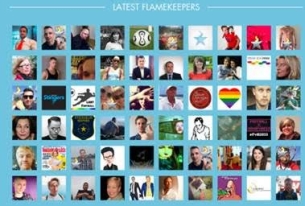 In the build up to EuroGames Stockholm 2015 – one of the world’s largest LGBTQ events, taking place from 5 - 9 August – M&C Saatchi Stockholm has launched a social initiative, #FlamingStar, to drive awareness around equality in sport, and give people the opportunity to show their support.

Developed by M&C Saatchi Stockholm together with digital production company, Sticky Beat, the #FlamingStar campaign uses the official EuroGames Stockholm logo as an empowering symbol of the fight against inequality in sport, which is EuroGames’ core message and focus.

Twitter users can sign-up to ‘carry the flame’ at http://flamingstar.eurogamesstockholm.com/ and join the line-up of those already showing their support – which includes sports stars, actors and politicians – and will receive a notification on Twitter when it’s their turn. Each supporter will ‘carry the flame’ for 15 minutes on their Twitter profile before passing it on to the next person.

Martin Cedergren, Executive Creative Director and Partner, at M&C Saatchi Stockholm, said: “This campaign is about giving people the opportunity to take action against discrimination in sport by showing their support. Everyone has the right to enjoy sport regardless of their gender, ethnicity or sexual orientation.”

Jakob Jansson, Chairman of EuroGames Stockholm, said: “EuroGames Stockholm’s main purpose is to work for the equality of all people regardless of gender identity, gender expression, ethnicity or sexual orientation in the areas of sports, culture and politics. The campaign is one of the initiatives to increase awareness of these issues and attract more people to take a stand and visit EuroGames Stockholm between 5th and 9th August.”

Founded in 1992 to combat discrimination and promote and support the right to practice all sports regardless of gender or sexuality, EuroGames is held every few years and is made up of a sporting, cultural and political programme.

The initiative follows an M&C Saatchi Berlin campaign to drive awareness and support for the Maccabi Games, the world’s largest Jewish sporting event, which took place in Berlin for the first time in July this year.