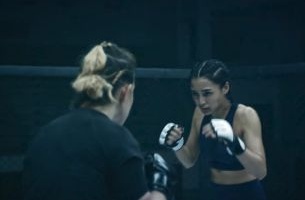 International facial tissue brand Kleenex turned the spotlight on the problem of bullying by featuring Rika Ishige, Thailand’s top female ONE Championship athlete also known as ‘Tinydoll’. A former victim of child bullying, Rika turned her life around after discovering her confidence through sports and martial arts.

She chose to speak out about her childhood as a small and very delicate half-Japanese girl growing up in Thailand.

In the film created by J. Walter Thompson Bangkok and shot by Baz Poonpiriya (the award-winning director behind box-office hit ‘Bad Genius’), the audience follows Rika’s story as she powers through adversity with her soft and gentle nature to overcome the bullies and become a martial arts champion.

Gaurav Gupta, Marketing Director, Kleenex said, “The journey of pursuing our personal best is filled with ups and downs. At Kimberly Clark we believe that Kleenex has the power to provide a touch of positivity to help uplift us when we are down and inspire us to pursue our best.”

Tuangrat Vuthicharn, Group Brand Manager said, “Thai women, like women all over the world, face insurmountable challenges in breaking the glass ceiling in various fields. Rika’s journey as a professional fighter has not only broken stereotypes of what Thai women can and cannot do but has also served as an inspiration for millions of Thai women to not be disillusioned by setbacks and to continue to pursue their dreams – values which we believe align perfectly with what Kleenex wishes to stand for.”

Added João Braga, Chief Creative Officer J. Walter Thompson Bangkok, “It was amazing to tell Rika’s story, she’s such an inspiring role-model both as a sportsperson and as a spokesperson for victims of bullying the world over. To win at Cannes is an affirmation of the tremendously talented team who worked on this campaign.”