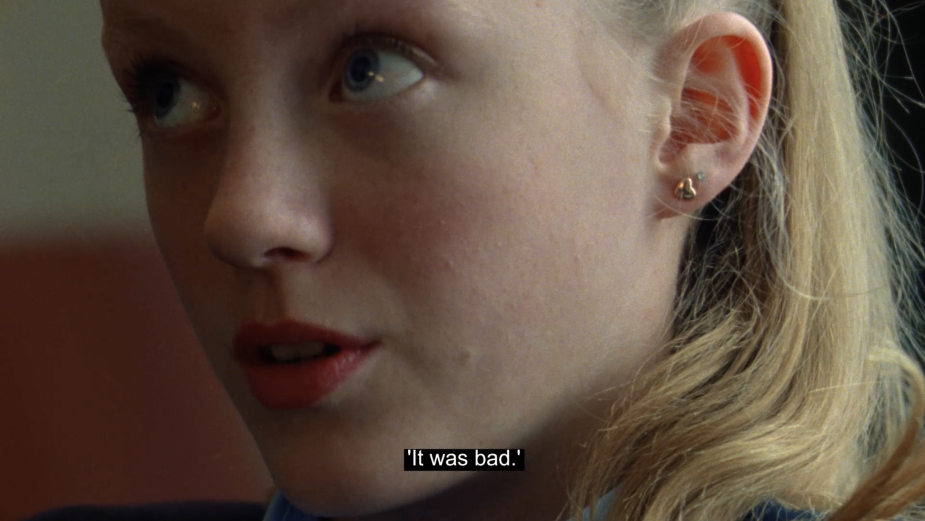 Almost half of young people struggle with anxiety and more than 400,000 children and young people a month are being treated for mental health problems — the highest number on record.

This new campaign, supported by Mind and YoungMinds, and SAMH in Scotland, aims to address the fact that even though young people are carrying a lot on their shoulders, they often struggle to talk about it. Its core message is how important it is for adults to keep trying, because it takes time to break through.

Britain Get Talking relaunches with a powerful new film showing the interaction between a parent and their child after a rough day at school. It uses subtitles to reveal how they both really feel as opposed to what they say to one another, reminding the audience of how difficult it can be to open up.

The film opens to a father watching TV as his young daughter arrives home from school — he offers her a cup of tea and begins to ask her questions about her day. The girl doesn’t seem like her usual self, looking down at her phone and picking at her nails, avoiding eye contact. As her father begins to ask about her troubles at school, his daughter assures him ‘she’s fine’ — though her body language and the subtitles on screen suggest otherwise.

Her father can pick up on the mixed signals so continues to try to connect with her, asking more questions, but still getting nowhere. As the two sit in an awkward silence, eventually her Dad pauses the TV, turns to his daughter and lets her know he is there for her to talk to no matter what. After trying again and again, finally he breaks through to her. We see the girl become relieved and begin to really say what’s on her mind. While young people struggling with their mental health may not want to open up until they’re ready, we see that in this case the multiple attempts her dad made, without giving up, helped her to talk about her worries.

The film aims to give adults the hope that they can break through to their teens and the wider campaign seeks to give them the time and the tools to help have those conversations.

Britain Get Talking is supported by Mind and YoungMinds, and by SAMH in Scotland, to encourage people to look after their mental health by connecting with others. Created with Uncommon Creative Studio, it originally launched in 2019 by pausing the live broadcast of Britain’s Got Talent, and then as lockdown beckoned, Ant and Dec invited the nation to send their messages of support for broadcast and to stay in touch with the message that we’re ‘apart, but never alone.’

Since its initial launch, research indicates that Britons have had 100 million new or more meaningful conversations as a result of the campaign, which has featured celebrities from Captain Tom to Susanna Reid, Maya Jama to Shirley Hancock.

Susie Braun, director of social purpose, ITV said: “Britain Get Talking has always been about connecting, which is one of the most powerful ways we can look after our mental health. With children and young people increasingly facing challenges to their mental wellbeing, this campaign encourages and celebrates taking the time and making space for conversation. We hope this campaign can be a reminder to anyone with a teenager in their lives to keep making time to break through.”

Nils Leonard, co-founder at Uncommon added: “Exploring the gap between what we say and how we feel felt an important conversation to bring to bear, especially when it comes to the young people in our lives. Since launching Britain Get Talking with ITV it has become the UK’s most recognised mental health campaign and started over 100 million conversations. We’re incredibly proud of the impact this initiative continues to have and is exactly the type of work we wanted to make when we set-up Uncommon.”

The film will air in an exclusive moment on ITV’s Good Morning Britain on Tuesday 26th and run throughout the channel this Summer. The campaign will also include on screen breakthrough moments interrupting the broadcaster’s programming throughout the week. More on this to come.

Emma Thomas, chief executive at YoungMinds, said: “There has been nothing normal about the past few years — our young people have faced disruption to their education, isolation from friends and family and uncertainty about their futures. This is reflected in record numbers of seeking help and being referred for NHS treatment for their mental health. We know that sadly, so many are still waiting for the right support. Early help, when young people first start to struggle with their mental health, can make a huge difference and there are many, simple ways to be there for a young person when they ask for support. One of those is having a conversation about how they are feeling, which is why we are backing the Britain Get Talking campaign. Things are tough for young people right now, but when the adults around them take the time to check in and ask how they’re really doing, it can be the first step to them getting the right help.”

Paul Farmer, chief executive of Mind, said: “We know the last couple of years have been incredibly challenging for children and young people, and especially for those with existing mental health problems. Young people have had to deal with a huge amount of change and disruption to their daily lives, including school closures, loneliness and isolation. Not to mention the cost-of-living crisis that is taking an extra toll. Young people are still left facing an agonising wait in a mental health system that cannot keep up with demand. The scale of unmet need for relevant and appropriate mental health support for young people is huge and growing and will potentially leave hundreds of thousands of young people in crisis. The earlier a young person can get support for their mental health the more effective it’s likely to be. That’s why we’re proud to support ITV in encouraging adults to check in on the teenagers in their lives. It can be difficult to know how to talk about difficult emotions and feelings. But having the support and reassurance from an adult to know that it’s OK to have these conversations and ask for help, can make a real difference.”

Billy Watson, chief executive of SAMH, said: “We know it can be particularly hard for young people to know what to say if they’re feeling low. Talking about our feelings can be hard at the best of times and the last two years have been tough for young people. It’s more important than ever for adults to make time to talk and to listen to the teens in their lives - opening up can make a huge difference to their mental health. That’s why we’re proud to support the Britain Get Talking campaign. We hope to get even more people to bridge the communication gap and start a supportive mental health conversation across Scotland and the UK.”