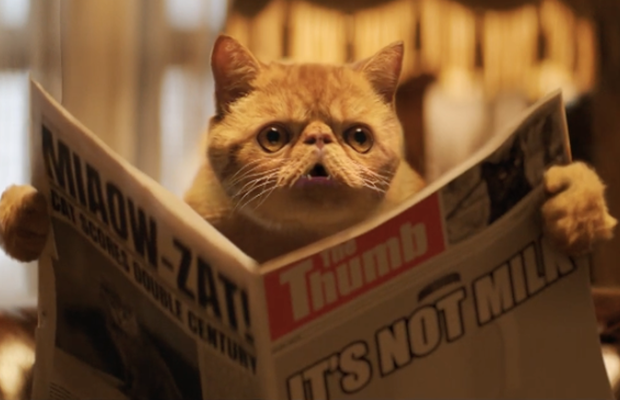 Arla Cravendale is launching ‘It’s Not Milk’, a new advertising campaign, created by Wieden+Kennedy London, celebrating that not all milk is created equal.
The campaign shines a spotlight on Arla Cravendale’s filtered milk, which makes it pure, longer-lasting and nicer-tasting and tells viewers that Cravendale is not milk, it’s fresh milk that’s filtered for purity.
Led by a 30’ TVC, the campaign whizzes through unusual situations where various people, ranging from a pair of tennis commentators to a clumsy robber to a milky silicon valley CEO and even a (familiar) cat with thumbs, repeatedly state ‘IT’S NOT MILK’. The spot, directed by Conor Byrne and produced by Hungry Man, ends on a farmer who breaks the format for consumers saying: “it’s not milk, it’s fresh milk that’s filtered for purity.”
The radio creative leads with a different approach, taking advantage of the fact Cravendale’s a milk brand claiming to be the opposite by playing on the convoluted legal terms and conditions, via an eventually breathless voiceover artist.
Emma Stanbury, at Arla Cravendale, said: “The new campaign celebrates what makes Arla Cravendale a cut above; that it’s filtered for purity. Throughout the ad we see Cravendale being
sought after in lots of different scenarios to convey it’s milky marvelousness. Step aside Champagne, a flute of Cravendale anyone?”
Joe de Souza, creative director, Wieden+Kennedy London, said: “Cravendale is not milk. Wait, what? Well...contrary to popular belief, not all milk is created equal. The campaign’s called ‘It’s Not Milk’ (but Arla Cravendale’s lawyers have advised us to make it clear in all press releases that Arla Cravendale definitely is milk, just fresh milk that’s been filtered for purity)."