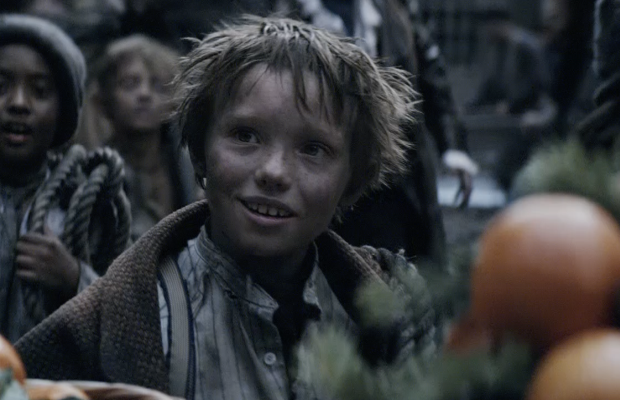 Christmas is a complicated crossroads for brands. Do they go full festive frenzy or tastefully restrained? Fun or functional? And are they looking to provoke tears of joy, or just tears?

This year UK supermarket Sainsbury’s has gone down the path marked ‘Downright Dickensian’ with their campaign. The hero spot takes us back to Victorian London and is packed with nods to the likes of Oliver Twist and A Christmas Carol.

And it’s a very deliberate choice from the brand and their creative agency, Wieden + Kennedy London. This year the supermarket has been celebrating its 150th year – an anniversary so momentous that the BBC is running a six-part docuseries on them and even turned up to the ad’s preview screening last week. A journey back to the beginnings of the brand placed the team right in the heart of Charles Dickens’ Victorian London.

“This year is incredibly important for Sainsburys as we are 150 years old and that means that we have seen 150 Christmases and served 150 Christmases – very few brands we think can actually say that and I think it sets us up to show that we understand what’s important for customers at Christmas,” says Laura Boothby, head of Broadcast Marketing at Sainsbury’s.

“When we were doing the ad, one of the things we looked at was our first Christmas was 1869, that is Dickensian London and that’s when you get loads of the tropes of Christmas and we needed to play on that. We think we’ve also got some pantomime vibes in there.”

That’s not to say that the spot is some sort of historical true story or a straight up Dickens adaptation. Instead it’s an amalgam of stories, myths, and influences. It features Sainsbury’s founders John James and Mary Ann outside their first shop, where they’re selling on-brand oranges, alongside a mob of orphaned tykes, Fagin, a cast of ghosts, a Javert-esque policeman and a cackling witch. It follows one of the orphans – Nicholas the Sweep – as he’s banished for thieving. With the help of Mary Ann Sainsbury he decides to secretly spread some joy by placing clementines into the socks off his fellow children.

“One of the other things we also likened it to was: how can we tell the origin story of father Christmas like it was batman?” explains Laura.

The spot was directed by Ninan Doff and produced by Pulse Films – Laura says the detail of the treatment blew the team away. It was shot in September on location in Romania where the production team were able to make full use of a pre-existing set built to resemble Victorian London.

In terms of the media strategy, Sainsbury’s faces a particular challenge. While most of the other UK supermarkets (aside from Tesco) launched their Christmas campaigns at least a week ago, Sainsbury’s purposefully and solemnly waits until after Armistice Day (November 11th), the day of remembrance which marks the end of WW1 and commemorates members of the armed services who have lost their lives in the line of duty.

“We actually launch a lot later than our competitors; we always launch after Armistice day because we want to make sure we give it the respect and the presence it needs in our store. So, we actually have a short window that we need to get as many people to see the ad as possible from the 12th right up to Christmas,” says Laura.

For Sainsbury’s, reach and frequency are the pillars of their media strategy. Rather than block out a whole ad break during a sought after Friday or Saturday night slot as other brands do in order to show the full version of the spot, they’re launching the 90 second version of the spot tonight (Tuesday 12th) and are focusing on broadcasting cutdowns on TV, to allow them greater frequency. The full 2 minute 30 second film will live solely online.

The campaign airs in a Britain which has weathered a long and tiring year of Brexit uncertainty and is now in the throes of an election. None of this could have been predicted by the marketing team, although the sumptuous Sunday night TV drama vibes certainly seemed designed to provide a bit of comforting nostalgia and escapism.

“I think the ambition of our Christmas ad every year is just to create festive joy - people don’t want to see miserable ads, whatever the mood of the nation is,” says Laura. “Actually our objectives every year don’t change – make something that people will love and adore, make it memorable and make sure people know it’s Sainsbury’s. I think the platform we had for 150 years was just so rich that it enabled us to do that in such a spectacular way.”