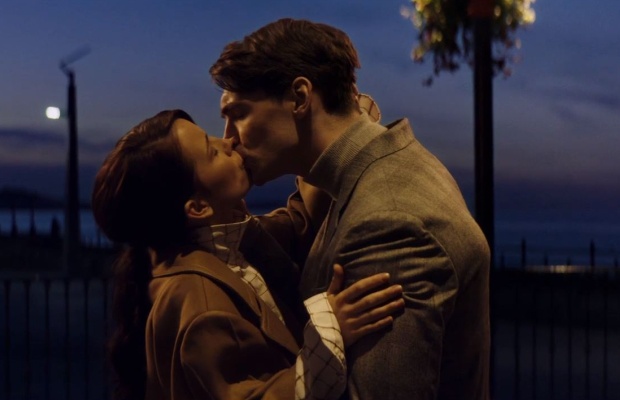 Love can be a fickle thing. Electric, euphoric, confusing, joyful, heartbreaking and painful. Somehow, the emotion that unites individuals can tumble us up and toss us out - often for the better and the worse. So when an iconic Irish department store wants to create a commercial that connects with an audience, immersing them in the emotion, there’s little else more evocative as love to do it. For Dermot Malone, director with Banjoman Films, this commercial was the opportunity to create a high fashion minded film with a visceral story at the heart of it.
In this interview, we chatted with director Dermot; Blacksmith NY’s senior flame artist and VFX supervisor Danny Morris, and colourist Mikey Pehanich about how they brought the Irish love story to life, the importance of keeping an open mind and exactly how they filmed those underwater scenes…

Brown Thomas - Belong Together from Banjoman Films on Vimeo.

Dermot Malone: Director at Banjoman Films
Q> What was the brief from Brown Thomas?
Dermot Malone> The brief was to find something that would connect, from there I knew I wanted to show a love story through all of its seasons; initial electric meeting, euphoric ‘honeymoon’ period, relationship breakdown, and final possible reconciliation. I also wanted to really visualise what true love can look like in a dream-scape way, which lead to a cool VFX scene in the piece.
It was important for the clothes to chime with the narrative too. Brown Thomas is a luxury Irish brand and this is the debut of their autumn/winter collection, but I didn’t want to create something with a lot of tight clothing shots to the detriment of the story. They were very kind, allowing me the freedom to experiment and create the story I had envisioned.
Q> How important was the casting to fulfil the brief of ‘connection’?
Dermot> Very important - as soon as I wrote the story I knew exactly who I wanted to cast. Sam, the male protagonist, is an actor I’ve known from Dublin for years. Interestingly, Mary-Kate, the female protagonist, has never acted in anything before. I saw her in an interview on TV talking about the importance of mental health and I reached out to her about working on this project. She doesn’t mind opening herself up or making herself vulnerable and that was key to the performance.

BTS: Storyboard image of 'bathroom' scene
Q> As an Irish heritage brand, was it crucial to Brown Thomas to showcase Ireland’s stunning locations?
Dermot> Absolutely. The location we shot at for the hotel room, bar scene, and accommodation, was Adare Manor in Limerick, where the 2026 Ryder Cup will be held. As Ireland’s best hotel and golf course, it was lovely to show such a beautiful part of the country. We did three days on location at Adare Manor and one day in a TeamFX purpose-built water tank in Wicklow.  The forest, bay and outdoor scenes were also shot in Wicklow.
Q> What was it like shooting underwater?
Dermot> The most important considerations were about making sure the cast were comfortable and didn’t get over-tired; managing their energy and output was key. The crew at TeamFX were incredible - the pool took two days to fill and was heated at 34 degrees. As with the whole shoot, the cast were brilliant and made what could have been difficult, very easy.
Shoot wise, our DOP Burschi Wojnar has a lot of experience shooting underwater and Blacksmith’s senior flame artist and VFX supervisor Danny also has extensive experience doing post on underwater shoots. It was the confluence of Danny and Burschi as well as my vision that made the experience so seamless. Danny told us exactly what we needed to do for the VFX and Burschi executed it perfectly. Thanks to their expertise, it was much more straightforward than it seems. 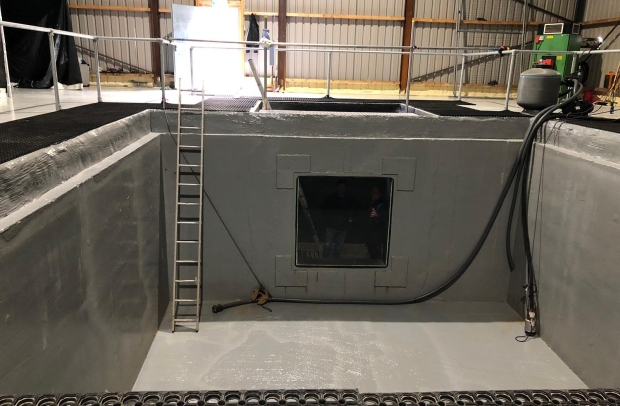 BTS: TeamFX water tank used for shooting underwater scenes
Danny Morris: VFX Supervisor at Blacksmith NY
Q> As an Irish expat living in New York, what was it like working with a brand like Brown Thomas?
Danny Morris> I was actually a little surprised and intrigued when Dermot said he was going to be working on a Brown Thomas commercial. It’s one of the most iconic and recognizable brands in Ireland. As the first brand film they’ve ever made, it was an honour to be part of it.
Q> How did VFX transform the underwater scenes from tank to endless ocean?
Danny> Those shots were well executed by Dermot and Burschi at a fantastic underwater studio. I had spoken to Dermot extensively about what he wanted for this so we had a clear plan for the shoot and VFX. As it was shot in a relatively small pool, I created the wide expanse of water to then composite them into. For this metaphorical world the couple travels into when they drift off, we decided to keep it simple and elegant with beautiful light rays coming through the vast dark expanse they are in. I worked in Flame for the project, whilst the grade was done in DaVinci Resolve.

BTS: Storyboard image of post-VFX eventual underwater scene
Q> What was the timeline like on this project?
Danny> We had a tight timeline but aligned on a long weekend to get it done fast. The overall project went very smoothly and it was a great pleasure to create the VFX shots and finish the spot with Dermot present in NY with us. It goes to show how face-to-face time in a finishing suite is always beneficial for the job.
Mikey Pehanich: Colourist at Blacksmith NY
Q> How did the colour grade change as the story evolved?
Mikey Pehanich> Prior to the session, Dermot and I spoke about how the grade would enhance the narrative of the piece. We stayed true to the environments as we travelled through the film and maintained a healthy amount of contrast throughout. The film was shot beautifully, so the grade happened very naturally; we didn't have to push too hard.
Q> How did you ensure the focus was kept on the clothes?
Mikey> When it came to the garments, we didn't want them to feel like we were forcing your eye to a specific piece - creating a beautiful image overall would naturally draw you into the details. The ending sunset scenes came together beautifully too. We were all raving about how they managed to capture some of the best weather Ireland had to offer.
Q> And finally, what was it like working with Banjoman on this?
Mikey> It was a blast to have Dermot and Head of Production, Matt, over for the grade. It's always a massive bonus when the director can be present for the session and this was a true example of that. The entire session was a healthy combination of creative energy and banter. I knew from the moment I met Dermot and Matt that we were going to vibe well. We talked about films, Ireland, rugby and told all sorts of hilarious stories; I was on the brink of tears from laughter several times.

“We Were One and Now I’m Half”: Banjoman Director Ciarán Dooley on Deconstructing Loss