The intense sequence is soundtracked by The Silent Comedy's 'Bartholomew' 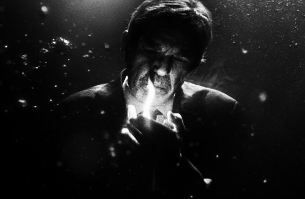 The underwater photography lends the film an atmospheric vibe while the backing track of The Silent Comedy’s “Bartholomew” grounds it in a down and dirty rhythm. The ominous backdrop is the perfect foil for Thornton's role as down-and-out lawyer Billy McBride, with Bill Yukich’s visuals striking the perfect balance between dreamlike and menacing.

The approved concept called for a dry shoot, so Yukich came up with solutions to make it seem as though the sequence was actually filmed underwater. Shot on the RED camera, Yukich employed a variety of in-camera techniques to achieve the illusion of water, smoke and fire existing within the same world, including the ingenious use of smoke to mimic the movement of crashing waves.

After wrapping the live action shoot with Thornton, Yukich edited and color corrected the sequence. The VFX work was mostly supplementary and used to enhance the practical effects which were captured on-set, such as adding extra fireballs into the frame to make the pyrotechnics feel fuller.

Once post production was complete, Yukich projected the sequence onto a screen which was submerged underwater and reshot the projected footage. Though technically challenging, this Inception-style method of re-shooting the footage gave the film the organic quality that Yukich was looking for.

Bill Yukich is an acclaimed editor who recently worked as lead editor for Beyoncé’s groundbreaking visual album Lemonade.  Stepping behind the lens was a natural progression for Yukich, who began directing concerts for bands like Godsmack and The Hollywood Undead as well as music videos for the likes of HIM, Vision of Disorder and The Foo Fighters. He is repped by GenPop for directing work worldwide.