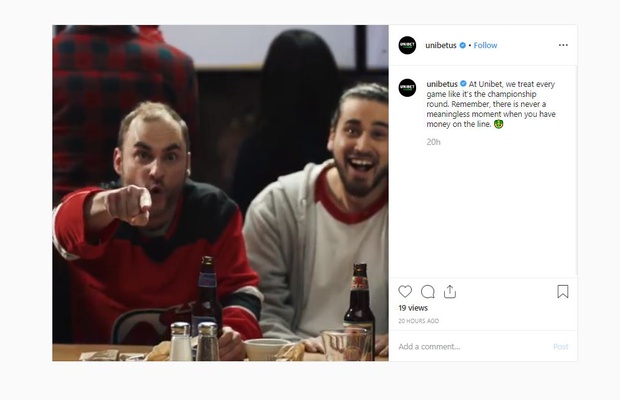 FCB New York, in partnership with Unibet – a premium online gambling operator – today announced that it has launched a new campaign entitled “Crazy About the Odds.” The work is the first by the agency since Unibet selected FCB New York as its U.S. Agency of Record in December 2018.

The new campaign, which launches Unibet Online Sportsbook in the United States, reflects the universal truth that when you have money on the line, the experience is intensified to a rather absurd degree.

“We’re winking at bettors, acknowledging that when you have skin in the game, you may be reacting in ways that are perceived as odd by less-invested fans,” said Gary Resch, FCB New York EVP, executive creative director. “For instance, why are you on the edge of your seat when it’s 49-3 while everyone else is filing out? Well, you took the over at 52, so the result is still in the balance.”

In Europe, Unibet has earned the trust of serious bettors, demonstrating for over 20 years an understanding of what players need in order to make informed bets and amplify their sports-watching experience. They seek to begin earning that trust in the U.S. by celebrating their kindred spirit with these bettors.

“We wanted the campaign to be an inside joke between Unibet and the savvy sports bettor. Not everyone will understand the dynamic portrayed in the ads, but the ones who do will know in an instant that we’re the brand that gets them,” said Arnas Janickas, head of U.S. marketing at Unibet. “They have a lot of choices out there, so we want to prove that Unibet is the one they want to be watching the games at the pub with.”

In this vein, the new campaign focuses on the raw emotion underlying sports betting moments. With different vignettes for different sports, the campaign will be relevant in every season.

For instance, two hockey fanatics have oddly been converted to tennis fanatics because of a simple bet. Two other bettors make a scene just seconds into a basketball game because they had money on who wins the tip-off. A gentleman pulls his own hammy celebrating a winning bet of a stolen base. While onlookers may think it pretty strange, FCB and Unibet understand that having a bet on a game amplifies the experience to the extent that exhibiting odd behavior is absolutely normal. Thus, the campaign rallying cry, “It’s not odd, it’s the odds.”

Unibet, which offers online sports betting, casino games, poker and bingo in 20 different languages for over 25 million customers throughout the UK, Europe and Australia, announced that it would expand into the U.S. in 2019, and tapped FCB as its key launch partner for the Unibet brand. Unibet is live in New Jersey, and looking to roll out in Pennsylvania later this year.

As legislation enabling online sports betting expands into states across the U.S., Unibet aims to deepen its authentic connection with its target audience while broadening the appeal to more casual sports fans who want some more “hell-yeah” moments.

LFG Puts Financial Conversations on the Menu This Christmas