Dry cereal. Yogurt-less mango lassi. A cookie dunked in water. These slightly uncomfortable images are what happens when dairy gets taken out of the equation. This bleak culinary vision is the reason that BC Dairy and Alberta Milk have released a series of videos, OOH and digital ads, parodying this idea and showcasing how nothing comes close to the satisfaction of OG dairy.
To pull this off, they partnered with creative agency TAXI, who found that considerably fewer young people - specifically gen z - are consuming dairy in today’s day and age. As such, to target the generation’s love of all things funny, weird and cringe, the agency released three 15-second videos that paired the feeling of dairy-free dishes with unexpected, unpleasant situations - using subversive comedy to remind viewers that water-soaked cookies simply don’t taste good.
To find out more, LBB’s Josh Neufeldt sat down with TAXI art director Georgia Inerfield, senior copywriter Mike Houldsworth and senior planner Brian Tang, to discuss how these uncomfortable yet funny spots came to be.

LBB> This campaign is very clever! What was the brief, and what immediate ideas came to mind?

Georgia> Thanks! This brief was a challenging one in the best way possible. Ultimately, it was to convince a cohort of people who consume less dairy that good old-fashioned dairy milk is still the OG. The brief and the strategy were simple; real dairy just tastes great. I think we always knew a weird solution was the only way forward with this campaign, and we had a lot of fun ideating on this. We even talked about putting dairy on the dark web!


LBB> Where did you start when taking on this process? Did you immediately know you wanted to play with the idea of what would happen if certain iconic foods lost their dairy element, or were there other ideas under consideration?

Mike> As with all briefs, we started by throwing around as many ideas as possible before ultimately landing on this approach. That being said, I think ‘food being inferior without dairy’ was always ticking away in the back of our minds, and was something we kept coming back to.


LBB> This campaign is designed to target gen z, who don’t view dairy as a key ingredient. What was the research process like behind this, what key takeaways came from it, and what made this the best approach to target their attention?

Brian> Our research partner, Intensions, conducts quarterly research which shows us that younger people are still consuming dairy - just considerably less than other generations. There’s a lot of different reasons people have, and to each their own! But, there’s a reason why a lot of what we make and eat is delicious and feels comforting: dairy. So, when someone’s reason for not consuming dairy is taste, well we’re sorry, but that’s just absurd. And that got us thinking – younger people lean into the absurd and weird. They’re comfortable with uncomfortable and get excited by cringe, so we dove into those feelings and that humour for these spots.


LBB> What made this approach the right choice for both BC Dairy and Alberta Milk? And in general, what was it like collaborating with both of them at once?

Brian> The challenge was finding that common ground between audiences in BC and Alberta, but this approach leaned into the awkward and weird to connect people with that universal feeling of disappointment when things are made without dairy.

Although we were working with both BC Dairy and Alberta Milk and marketing to two distinct groups of people in each province, we were also working with one cohesive marketing team. Having people representing both sides of the coin made things smooth and seamless, and we were able to see the nuances in both markets and hear real-time feedback about whether or not a concept might work in one and not the other.


LBB> What was the writing process like? How did you choose dishes to feature sans dairy, and how did you come up with scenarios to compare the dairy-less dishes too?

Mike> Is it cliché to say that we got to where we did because of everyone involved? We started with weird jokes, and we ended it with a director who was able to take our weird jokes and then apply his own particular brand of weird to them.

LBB> Please tell us more about how the spots were made! Who did you work with, who directed, and what was the post process like?

Georgia> We worked with the very talented Grayson Whitehurst, who directed these four spots. He understood our vision and pushed the spots into a wonderfully weird world, switching up aspect ratios and playful camera angles. Our editor was Julie Simmons at Saints Editorial, who did a phenomenal job bringing it all together in post.

Mike> I second this. Grayson and Julie were amazing.


LBB> The actors are amazing - especially the deadpan voice of the narrator. Who did you cast, and what was that process like?

Mike> We couldn’t agree more! We lucked out big time with all of the actors who were total pros (even when we made them do multiple takes laying in front of a freezing cold sprinkler in early November). The narrator is Kavita Musti, and she absolutely nailed the deadpan delivery we were looking for.

Georgia> Like Mike said, we really put the actors through some trials and tribulations, but they were all amazing and made this such a success.


LBB> The sound design really enhances the quality. Who did you work with on this front, and why was this such a key focus of each spot?

Georgia> We wanted to tell the stories of these absurd scenarios through the facial expressions of our cast experiencing a world without dairy, and because of this, we chose little to no speaking roles for the cast. Enter sound design. We brought Andrew Harris at Vapor Music into our dairy-free world and he just got it! From the spooky music in grandma's house to the squeaky friction noise of going down a waterless water slide, we were thrilled that sound design ended up being a whole character in itself.


LBB> Given that it was for audiences in two provinces, did that factor into the making of the campaign in any way? And if so, how did you approach accordingly?

Georgia> Making this campaign resonate with both provinces was important for us and our clients. Once we crafted the four different stories, we found ways to include province specific easter eggs. Keep a close eye on wall art in the party room, listen to the radio when we’re making breakfast, and see if you can spot any other surprises!


LBB> What challenges have you faced during this project? How did you overcome them?

Mike> The hardest part was the research - particularly for Brian who had to eat five full packs of cookies that had been repeatedly dunked in water until fully saturated in order to test the hypothesis that milk is better. And they weren’t small ones, either.

Otherwise, I’d say the timeline we worked with was challenging. We had to work fast and efficiently to go from concept to finished product – something that was only made possible by everyone working together as a team.

Brian> I’m not sure why we had to finish the five packs though. I thought the first cookie or two would be enough to get that point across…

LBB> How have people reacted to this new campaign?

Brian> It’s still early days, but we’re encouraged by what we’re seeing so far in preliminary tracking. In the first month, campaign recall has been twice as high for this younger group, and ultimately people are finding the weirdness and humour relatable, which speaks to how universal that feeling of not having dairy in a lot of our meals and drinks really is.

Georgia> We also just had a great time making something super fun and weird!

Mike> Sorry you had to eat all those waterlogged cookies, Brian.
view more - Behind the Work 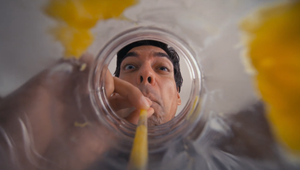 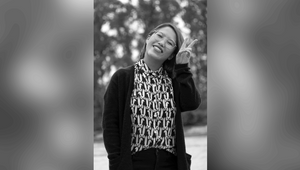 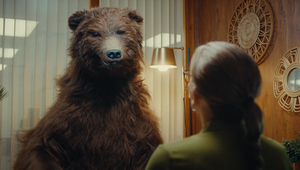 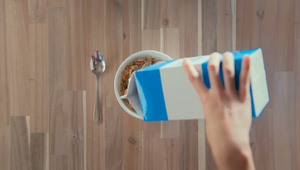 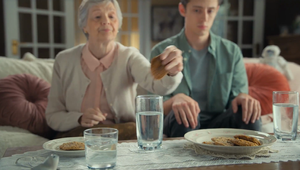 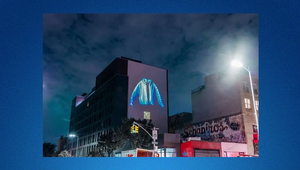