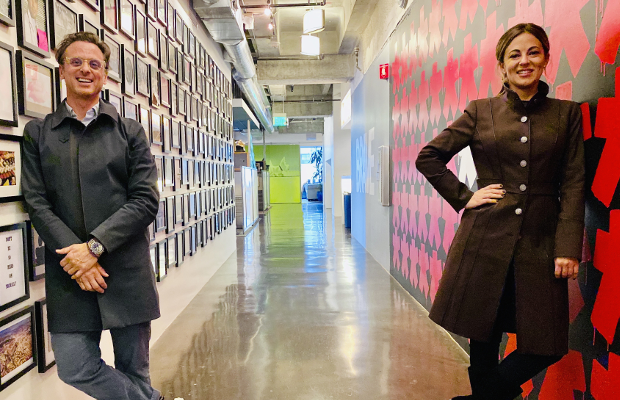 David Angelo, founder & chairman of integrated creative agency David&Goliath (D&G) appoints Michele Tebbe as chief marketing officer, formally D&G’s managing director of strategic partnerships responsible for new business development, and hired Josh Miller as executive creative director. Reporting directly to David, Michele will lead the growth and nurturing of the D&G brand including development of new business, amplifying agency culture and fostering new client relationships. Also reporting to David, Josh’s primary responsibilities include helping to manage the creative department, mentoring new talent, and looking for opportunities to continually optimise in-house production capabilities. He’ll be overseeing creative for clients including California Lottery and Auto–Owners Insurance.
“I’ve had the upmost pleasure of knowing both Michele and Josh professionally for years. Michele brings an unbridled commitment to our agency culture and brand. Not because it’s a job but because she is a challenger herself. And she doesn’t stop at the doors of our agency, she is always thinking of new and different ways to help challenger brands step into their greatness. That is why we felt there is no better person to represent the authenticity and might of the D&G brand,” said David Angelo, founder and chairman of David&Goliath. “Prior to D&G, Josh and I worked together and traveled the world creating a number of campaigns including a global campaign for Fanta. His big thinking, overall production expertise as a director and challenger mindset makes him the ideal creative leader for our brand as we move into the next decade. Together these two individuals bring a level of experience and commitment towards helping challenger brands not just meet but exceed the norm.”
Michele Tebbe, Chief Marketing Officer
Michele has been with D&G since September 2014 when she led the new business pitch and eventual win for Jack in the Box. She then went on to lead the Jack in the Box account for two years as group account director before taking on a role in new business development.
Her previous agency experience includes group account director and management supervisor at TBWA/Chiat/Day, account director at 180LA and account supervisor at FCB Global and has worked across a number of brand categories with accounts including Nissan, CVS, Singapore Airlines, Bank of America, Procter&Gamble, Bare Essentials, and Sony.
“I am so honoured to be the CMO here. There truly is no other agency brand in the world like David&Goliath. We have a clearly defined purpose and culture and as a marketer that’s the gold standard we’ve created not only for our agency, but for our clients too,” said Michele. “We’ve always been a challenger, and that’s really a mindset, not a market position. Today, brands face Goliaths that are bigger and more rapid fire. You can be number one in your category and out of business the next. Which is why we seek partners with that challenger mindset and who are ready to take on their Goliaths. Our mantra…Bring us your Goliaths! We’re ready to take them on.”
Josh Miller, Executive Creative Director
Josh joins D&G from HUMONGOUS Productions as creative director producing ads for brands including Klondike Ice Cream, General Mills, The Jewish Federation, and the Bronx Zoo, as well as directing music videos and a branded series on Comedy Central called ‘Handy.’ Prior to that he worked at B-Reel Films as commercial and content film director on brands such as DELL Computers and Red Bull. His career in advertising includes posts at Team One as co-creative director, Cliff Freeman & Partners in New York as VP and group creative director, Hampel Stefanides and Kirshenbaum, Bond & Partners. Over his expansive ad career he worked with brands such as Lexus, Sauza, Hornitos Tequila, Staples, XBOX, UPS and Apple and received industry awards including One Show, British D&AD, and Art Directors Club award.
Josh shared: “I feel like my career has come full circle, working with David again after all these years since our early days at Cliff Freeman & Partners. As a writer and creative director who has spent many years directing commercials and branded entertainment, I don’t have the most conventional resumé. Lucky for me, David and his agency David&Goliath don’t put a lot of stock in convention. I love the environment and culture he’s created, and I genuinely enjoy going to work each day, and being surrounded by people who are so much smarter, more talented and interesting than I am!”

Kia Gives it Everything for Powerful Super Bowl Teaser Spot

In a Business That Changes Daily, You Have to Stay True to Grow

How Many Features Can the Kia Sorento Showcase in 300 Feet?