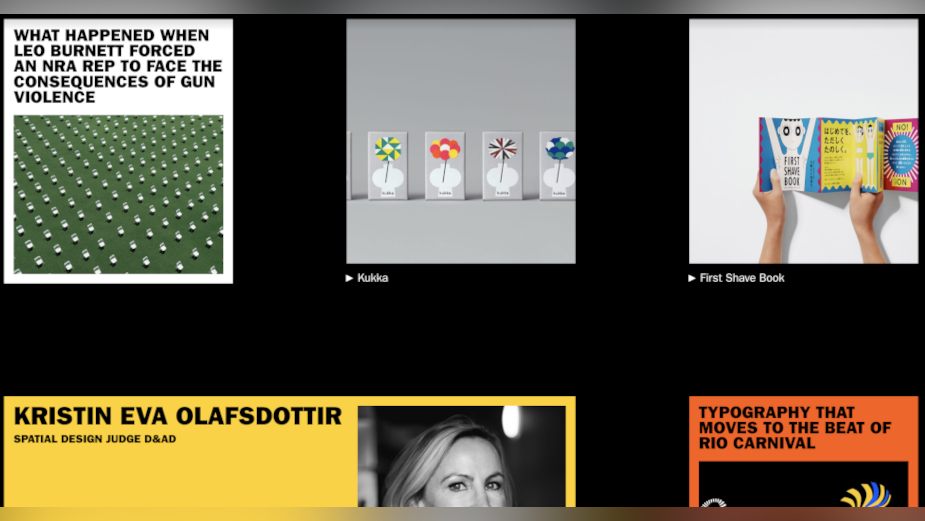 D&AD today launches its 60th D&AD Annual – a free-to-access, digital deep-dive into the key themes and creative processes explored via Award-winning work in 2022. Designed by Studio Dumbar, this year’s Annual introduces individual rankings that recognise creatives’ personal performance at this year’s Awards, as well as downloadable digital certificates personalised to all credited winners.

As part of D&AD’s mission to stimulate creative learning as a lifelong process integral to creative practice and increase its accessibility to wider audiences, the D&AD Annual serves as the ultimate source for education and inspiration for both emerging and seasoned talent from all backgrounds. It is now published as a freely available online resource – building on the incredibly positive numbers from the last two years, which saw the digital Annual reach 130,000 people. Of these, 26,000 were young creatives, with 24% based in the UK, and 76% internationally.

In its 60th edition, the D&AD Annual sees the introduction of 20 individual creative rankings, in an effort to further recognise those that have demonstrated creative excellence and made a true impact on the industry. Roles ranked include:

Full rankings can be accessed here.

More than a compilation of Award-winning work, the D&AD Annual aims to unpack how creative excellence is achieved and explore the cultural context in which Award-winning work has been created, by inviting acclaimed industry experts to offer their views and opinions around issues touched on by Pencil winners in 2022. Across a series of 10 editorial pieces, renowned creative thinkers with diverse expertise address topics ranging from pushing back against a homogenised design aesthetic, and the evolution of fashion film; to broader cultural issues, such as race and photography; privacy in a world of sharing and surveillance; how social media has distorted young women’s sense of self, and more. A full list of these 10 Voices pieces can be found in the notes to editors.

The Annual also includes a series of interviews with the creative teams behind Pencil-winning work, with designers, producers, strategists and more sharing the secrets behind how it was made, and why it embodies creative excellence. Highlights include conversations with Andy Gent, the animation talent behind the characterful puppets that populate Wes Anderson’s fantasy worlds; director Danielle Rizkallah, walking readers through McCann Paris’ clever navigation of cultural taboos around women’s bodies, in which a Lebanese baker demonstrates the steps of a breast self-exam through kneading dough; and Arnaud Bresson, director at DIVISION, disclosing how Kanye West briefed his video team for the music video for 'Heaven and Hell'.

A special addition to this year’s Annual is a collection of recollections written by previous presidents in celebration of the organisation’s 60th anniversary. The Book of Presidents – a reinterpretation of the 2012 edition in celebration of D&AD’s 50th anniversary – features words from remarkable D&AD figures in the last decade, such as Laura Jordan Bambach, Neville Brody, Naresh Ramchandani and D&AD’s current President, Rebecca Wright.

The Annual is free to access to all and is now available to view via the D&AD website.

Rebecca Wright, D&AD president, commented, “We are all constantly learning throughout our careers – it’s a lifelong process integral to creative practice, to innovation and to the development of our disciplines. One of the most valuable sources of learning is from our peers which is why the D&AD Annual is both important and compelling. Whether you’re an aspiring creative or established practitioner, this is the ultimate benchmark for creative excellence, and a place to keep returning for inspiration and insights. It is a brilliant, beautiful and dynamic learning tool and the Still Learning Live event day is a fitting day for its launch”.

Donal Keenan, awards director at D&AD, commented, “This year has been an outstanding one for global creativity, with a record-breaking number of applicants in 2022 and a total of five Black Pencils awarded to projects that have astounded us with their unique creative approaches. The digital Annual is the most effective way for D&AD to further celebrate and stimulate learning from Award-winning work, making it accessible to as broad and diverse a creative community as possible”.

The launch of this year’s Annual coincides with 'Still Learning Live', a one-day, in-person talks and networking event hosted by D&AD President Rebecca Wright. At the symposium, D&AD will be presenting two D&AD President’s Awards, the organisation’s lifetime achievement awarding industry heroes for their creative contribution. D&AD’s Annual President Award will be given to Saki Mafundikwa for his collaboration to design and design education, particularly when it comes to Afrikan design, for over 30 years. A second, honorary 10-year edition of the accolade, chosen by D&AD’s board once every decade, will be awarded to Paula Scher, in recognition of her advocacy for design excellence and originality, and for the fearless simplicity of her work which over 50 years has made unknown brands iconic and iconic brands epic.

D&AD Launches 2023 Awards Entries with Digital Campaign from Re