Could This Polish Innovation Save the Bees? 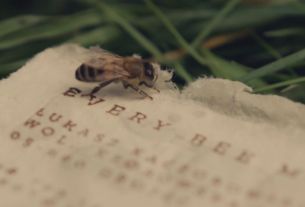 Dropping litter, I think we can all agree, is a bad thing. I might go further and suggest that it marks one out as one of the worst kinds of human. But then again, not all litter is created equal – and a new kind of paper has just been revealed that Mother Nature might be quite happy for you to drop.

Saatchi & Saatchi IS Warsaw has teamed up with City Bees, an urban bee conservation organisation, to create Bee Saving Paper. It’s a new biodegradable material that has many applications and can also work like an ‘energy drink’ for bees.

This invention was created in response to the dramatic decline in the global bee population. Although bees are estimated to provide a global economic value of €150bn and are thought to be responsible for keeping 90% of all wild plants in existence, humans have not been particularly careful about protecting these fuzzy, flying friends. In Poland, where the project originated, 222 out of 469 species are already on the verge of the extinction.

One of the major problems that bees face - alongside extensive use of pesticides - is that rapid industrialisation and urban development has depleted their food sources. They are forced to fly long distances to find food, leaving them exhausted and dying because they simply lack the energy to survive.

In order to develop the paper, the agency collaborated with a range of specialists including entomology and paper craftsmen. The paper contains energy-rich glucose (though it is non-sticky to touch) and seeds and is covered in water-based UV paint. The paint can be seen by bees and so it is applied on the paper in a pattern that resembles a meadow full of plants and pollen.

Once the bee buzzes off, well-fed and revived, it leaves behind the seeds, which then grow and flower. That means that next season even more bees can benefit.

“We managed to develop and produce what is probably the first paper nature would not only like you to use, but maybe even to drop. We know our innovation won’t solve the worldwide problem of the declining bee population, but we hope we’ll at least make people realise how important bees are to us,” said Tomasz Bujok and Anna Gadecka, senior creatives on the project.

Bee Saving Paper has already passed a successful field test, when it was used to create the visual identity – or as the creators prefer to call it, beesiness identity – for a beekeeper who lost over 95% of his hives.

For now the creators are in start-up mode and are looking for clients and brands to partner with now that the paper is ready for mass production and collaboration. They’re also open to online enquiries.