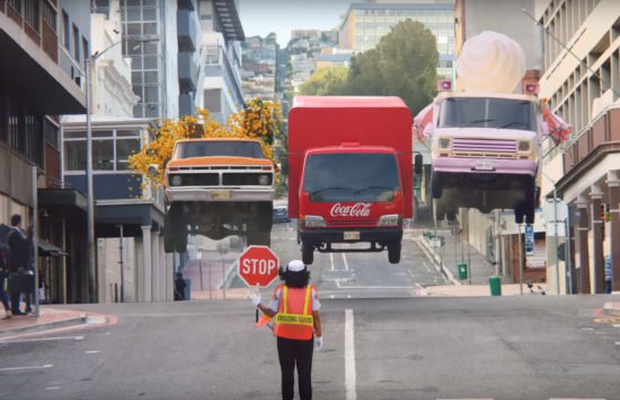 Created by Wieden+Kennedy Portland and directed by Prettybird's Tom Noakes the 30-second spot opens on a Coca-Cola lorry driving down a highway before an ice cream van passes, handbrake turns and gives chase. Before long, a truck spilling oranges out its back rams through a wall and joins the fun. Check out 'The Chase' below.

The spot is part of a full, multimedia campaign to support the launch of Coca-Cola's latest product, which follows a number of flavoured releases since the brand launched its One Brand strategy - which combined all Coca-Cola variants under a common visual identity and creative campaign - in 2016.

“What we realised is that we had a diamond in the rough when we looked at our flavors portfolio,” said Kate Carpenter, brand director, Coca-Cola. “The growth of Cherry Coke and Vanilla Coke – and their zero-calorie variants – has been really strong in recent years even with very limited marketing support.”

Despite this growth, only 12 percent of Coca-Cola drinkers were reaching for flavors. “This showed us our fans want choice but are getting it outside the Coke Trademark,” Carpenter said. “We knew we had an opportunity to give fans the variety they crave without sacrificing the Coca-Cola taste they love.”

The team considered three other flavors – raspberry, lemon and ginger. But the combination of orange and vanilla emerged as the clear favorite in focus groups. Last summer, Coke Orange No Sugar launched in Australia and Coke Orange Vanilla was available in Canada. Consumers in both markets loved the taste.

“We wanted to bring back positive memories of carefree summer days,” Carpenter explained. “That’s why we leaned into the orange-vanilla flavor combination – which is reminiscent of the creamy orange popsicles we grew up loving, but in a classically Coke way.”

In less than a year, the Coca-Cola North America innovation team brought Orange Vanilla Coke to life – from concept, to testing, to launch. Importantly, more than half of those who sampled the new flavor said they would buy it in addition to – not instead of – Coca-Cola or Coca-Cola Zero Sugar.

The launch, which comes on the heels of the introduction of new Diet Coke Blueberry Acai and Strawberry Guava, is the latest example of Coca-Cola listening to what consumers want and offering an array choices that satisfy a variety of changing tastes and lifestyles – and moving quickly and taking smart risks to bring more drinks to market.

Music Company: We Are Walker