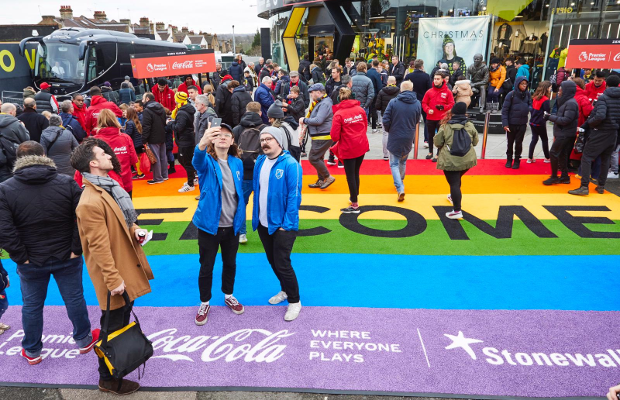 In support of Stonewall's Rainbow Laces campaign, giant rainbow mats with the word 'Welcome' were placed outside a number of Premier League stadiums hosting fixtures between 7th-9th December, as part of Coca-Cola’s Premier League partnership and its ‘Where Everyone Plays’ campaign.
With the aim of raising awareness that football is a game for everyone and to celebrate the incredible diversity throughout the Premier League, the mats aimed to reiterate the message that everyone is welcome and has the right to support their team in a safe and fun environment.
Supporting charity partner Stonewall and its Rainbow Laces campaign, Coca-Cola, which is the official soft drink partner of the Premier League, purchased 30,000 rainbow-coloured laces from Stonewall to gift to fans throughout the weekend, alongside a small can of Coca-Cola zero sugar.
The activity marks Coca-Cola’s ongoing support for the LGBT community. As well as a donation to Stonewall, which will help ensure they can continue their vital work, Coca-Cola has also partnered with other organisations to join TeamPride, which is committed to making LGBT people feel welcomed and included in sport.
Kris Robbens, marketing director for Coca-Cola Great Britain and Ireland, said: “Coca-Cola has always valued diversity and equality. With a long-standing history as a supporter of the LGBT community, we’re proud to be part of TeamPride, with the aim of ensuring everyone feels included and excited to enjoy sport.
“Through our association with the Premier League and partnership with Stonewall, we’re happy to be working together to promote open-mindedness as part of our ‘Where Everyone Plays’ campaign and we hope those attending matches this weekend enjoy the impactful sight of the welcome mats.”
Robbie de Santos, director of sport, Stonewall, commented: “When Rainbow Laces started, we asked people to lace up to raise awareness of equality in football. Since then, the campaign has grown phenomenally and is no longer just about football. But, we know from our research, that many lesbian, gay, bi and trans people still feel that public sporting events aren’t a welcoming space. The support from Coca-Cola this year and for the next three years will be invaluable in helping us achieve our mission of making sport everyone’s game.”
Premier League fans could show their support for Rainbow Laces by taking a photo at their club's welcome mat and posting using #RainbowLaces and #WhereEveryonePlays over the weekend.