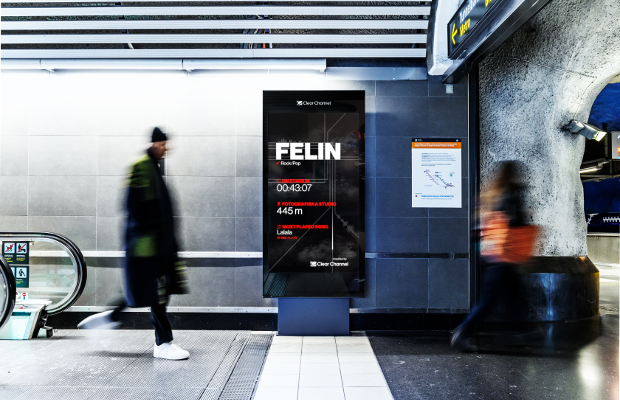 In 2019 a number of classic music venues in Stockholm have been shut down for good, creating public outcry and massive media attention. In a digital outdoor effort, labelled Stockholm Underground, Clear Channel aims to focus on the positive and steer Stockholmers towards new live music experiences.
Developing the campaign, Clear Channel created a database of upcoming live-shows from unsigned local bands. As a gig draws near, the GPS-coordinates of the venue triggers the 100 closest digital screens – creating an invitation to drop in and discover something new.
Daniel Vaccino, copywriter at Åkestam Holst NoA, said: “The streaming-sites promised to democratize music, but as things stand, small bands have the algorithms working against them – and it’s perhaps harder than ever to get people to notice your music.”
Apart from aggregating data from sites, blogs and Facebook-Events, the campaign also held an open invitation for bands to add their own gig-dates – giving even the smallest act a chance to make a big impact.
Noah Bramme, copywriter at Åkestam Holst NoA, describes the mechanics of the campaign: “We are basically connecting Clear Channels digital screens in the underground with venues from Stockholm’s underground music scene. It’s a new way of mapping outdoor ads, more than a campaign really. In the long run it’s easy to see how the same approach could be used in other cities, or to promote other aspects of what a city can offer culturally.
“Sweden has a successful musical export in the last decades, with breakthrough artists such as Lykke Li, Tove Lo, Robyn, Swedish House Mafia, and many others. Even big bands start out small, and perhaps Stockholm Underground can be the lighting spark for tomorrow's next big sensation. And even if it isn't, that’s cool too.
“The point here isn’t to create great commercial success, but rather, to showcase the diversity of the Stockholm Underground music scene.”
The first-of-its-kind initiative uses data sources such as time, location, noise levels, streaming statistics as triggers so that when live music shows are taking place, Clear Channel’ digital billboards directs one to the nearest show.
Henriette Zeuchner, CEO at Clear Channel Scandinavia, says: “Both music and ads are better experienced in the Underground. Since we, in the Metro alone, can reach one million people everyday, it provides us with a unique opportunity to use our technology and infrastructure to find new ways of interacting with the public – in this case, by inspiring them to discover their new favourite music.”
Stockholm Underground goes live on October 23d and runs for three weeks, as its first outing. Stay tuned.