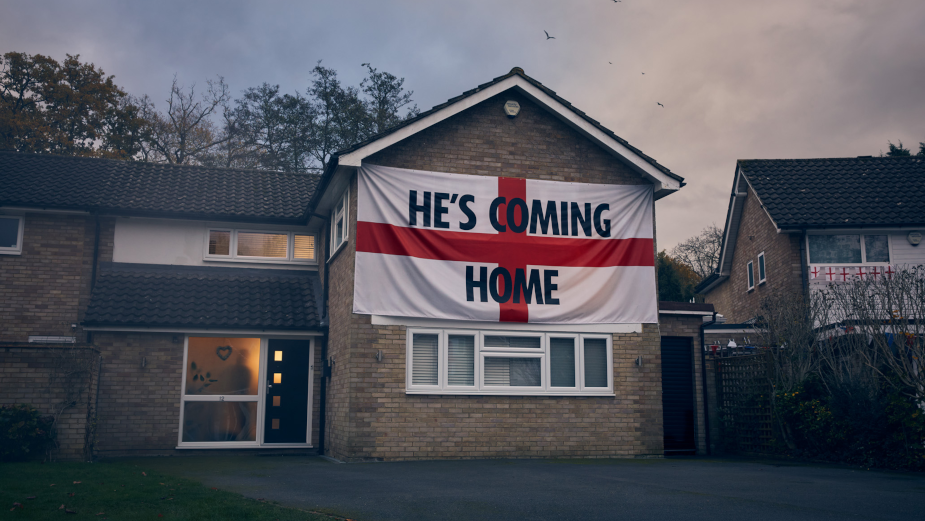 A chilling new campaign by House 337 for Women’s Aid highlights that domestic abuse can become more frequent or severe during big football tournaments, including the FIFA World Cup.

The tournament takes place in winter for the first time this year, when the cold and dark will mean that more fans than usual will choose to stay at home to watch the games. For many women, it is a time of fear, where existing domestic violence can increase, with incidents going up by as much as 38% (University of Lancaster). While football does not cause domestic abuse, existing abuse can intensify around key tournaments, meaning that increased awareness can help the charity to save lives.

House 337’s campaign reassures these women that they are not alone and reminds us that, if we can all come together as a nation to support a football team, we can also come together to tackle domestic abuse.

The unsettling film takes the form of a single tracking shot through a cul-de-sac, showing the flags hanging up outside in support of the national team, while inside people are enjoying the game.

But as we round on the final house, the mood changes. The cheers stop and we see a huge flag that reads, 'He’s coming home,' highlighting the fear and isolation that many women will experience throughout the tournament.

The film is part of Women’s Aid’s two-year ‘Come Together To End Domestic Abuse’ campaign, which runs until 2024 and encourages the public to act together wherever they are and use actions big and small to end domestic abuse. Backed by Women’s Aid Patrons including Spice Girls star Melanie Brown and actor Dame Julie Walters, the campaign promotes five actions that everyone can take to stop domestic abuse, from adding their voice to campaigns to learning what to say to someone experiencing abuse. For more information on how to get involved, visit here.

Farah Nazeer, chief executive of Women’s Aid said, “There is a role to play for everyone in helping to end domestic abuse, and raising awareness of the support available during major tournaments like the upcoming World Cup can help many women living with abusive partners. While domestic abuse is not caused by football, we know existing abuse can become more severe or frequent during big tournaments. We ask everyone to help share this important campaign at a time when many women need to know how to get support.”

Christoper Ringsell, creative director from House 337 said, “During this time as the nation comes together we want to subvert the usual football tropes and shine a light on the chilling fact that for many women it’s a time of fear not celebration. They need your support too. The visual spectacle of the flag retains its power, but with a new, chilling twist. We want to encourage people to be aware of friends and neighbours in their community and come together to try and end domestic abuse. To seek out tangible things they can do to Be Women’s Aid”.

OOH sites across the country will display the ‘He’s coming home’ flag, which was designed by Corbin Shaw, a young artist whose work features hard-hitting words over the St George’s flag to challenge stereotypes of masculinity, class and LBGTQ+ issues. The flags will be auctioned at the end of the campaign to raise further funds.

The campaign launches on 25th November which marks International Day for the Elimination of Violence Against Women, just after England’s second group game in the World Cup against the USA.

Curtains, '80s Power Suits and Puffer Jackets? House 337 and Pay.UK Say It Might Be Time to Switch