Outdoor campaign from 4creative boards up hero of the story Danny 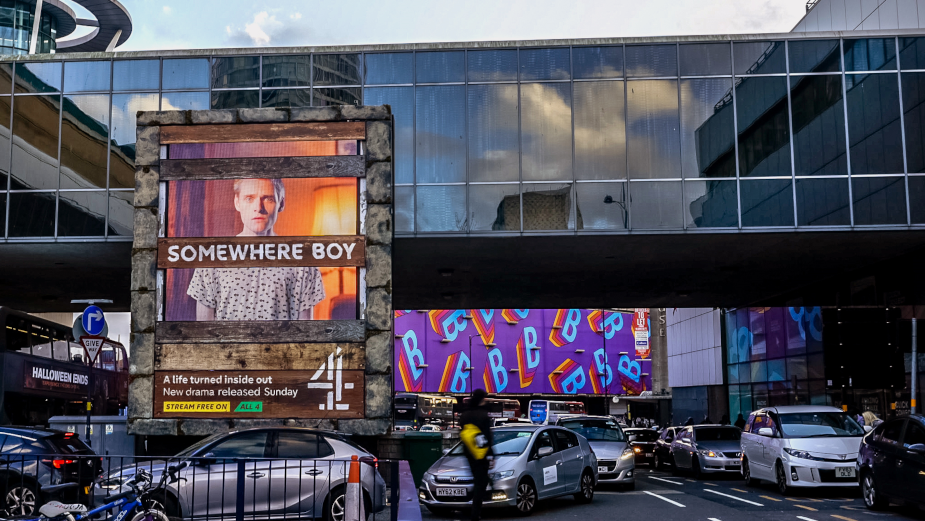 The outdoor campaign by 4creative has portrayed the series by physically boarding up an out of home site to hide the hero of Somewhere Boy behind a real lattice of wooden planks, complete with nine inch nails.

Installed on Wednesday last week in a site between the Bullring and New Street Station in Birmingham city centre, the motion billboard has changed day by day to gradually reveal Danny who can be seen cautiously looking out at the world through gaps in a boarded up window. 4creative has worked with Talon, Grand Visual and Ocean on the project, with media planning and buying by OMD.

Channel 4’s compelling eight part drama Somewhere Boy tells the story of Danny who has spent his whole life inside a house in the middle of nowhere, convinced by his Dad that the world outside is full of monsters waiting to take him away, just like they took his Mum. For eighteen years Danny and his Dad stayed in, cocooned from the world. Until one day Danny has to leave the house and everything he’s ever known explodes in an instant, and he has to come to terms with a world he never knew existed.

Commuters passing the special build in Birmingham could catch glimpses of the central character Danny peering out with a mix of fear and curiosity. Day by day he gradually became more visible as planks were removed overnight, until the full reveal yesterday (Sunday 16th October), the day of the first episode going out on Channel 4 and all episodes being made available on All 4.

Lynsey Atkin, executive creative director at 4creative said, “Whilst it may seem rather illogical to board up your own poster, it really did make perfect sense. Wooden planks were gradually removed over the course of the week to reveal our protagonist Danny and mirror his tentative steps into the real world. It turns out it’s not easy to construct a solid wooden façade over a huge digital billboard, so big thanks to all involved.”

4creative is Channel 4’s award winning in house creative agency which regularly delivers stunning campaigns for Channel 4, its brands and content. 4creative has built a reputation for producing ground-breaking work with Channel 4’s unique remit at its heart. This summer 4creative won the Film Grand Prix at the Cannes Lions for its Paralympics Super.Human campaign,  and earlier this month it scooped 28 Creative Circle Awards including multiple golds for Life’s Looking Sweeter for The Great British Bake Off and #LetHerFinish which launched on International Women’s Day.

Somewhere Boy features 8 x 30’ episodes, written by Pete Jackson (One Normal Night, Love In Recovery) and is produced by Clerkenwell Films, the makers of the BAFTA award-winning Channel 4 shows The End of the F***ing World and Misfits. Clerkenwell Films is owned by BBC Studios, who distribute the series internationally and who are showcasing the series to buyers from around the world at MIPCOM in Cannes this week.

Somewhere Boy is available now on Channel 4 and All 4.