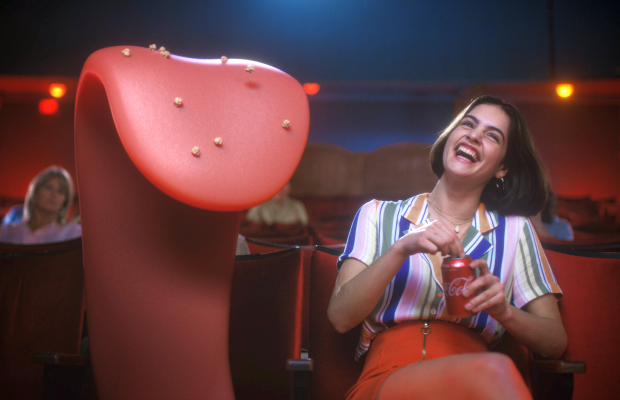 This summer, Coca-Cola has launched a new campaign that sparks memories of the magic associated with enjoying a Coca-Cola. The campaign celebrates the iconic taste of Coca-Cola and its unique ability to transport you to special moments and memories associated with the feeling of taking that first sip.
The campaign features a TVC which follows a woman enjoying a Coca-Cola and, as she feels the distinctive bubbles of her first sip, she is transported back to memories of being on a beach, playing sport and dancing with friends.
Created with Wieden+Kennedy London, the creative features a giant animated tongue which illustrates how the distinctive Coca-Cola taste behind each sip features in fond memories from summer holidays to sporting events.
Walter Susini, marketing director for Western Europe at Coca-Cola said: “Coca-Cola has the unique ability to evoke positive feelings and emotions associated with special memories and this campaign celebrates that.
“The creative dramatises the magic of the Coca-Cola taste both figuratively with the animated tongue and emotionally through the memories associated with taking that first sip of an ice-cold Coca-Cola on a summer’s day. We wanted to bring these moments to life and show that not only is Coca-Cola a delicious and refreshing drink, but that it also has the unique ability to bring back positive memories and associations of living your best life.”
Launching in Great Britain from the 29 July, the Magic Taste of Coca-Cola will launch across Europe and the marketing campaign will include a 60-second TVC, complemented with 30-second and 20-second spots, alongside out of home, digital experiential and PR.
The campaign soundtrack, La La La, is available through global streaming platforms including Spotify.