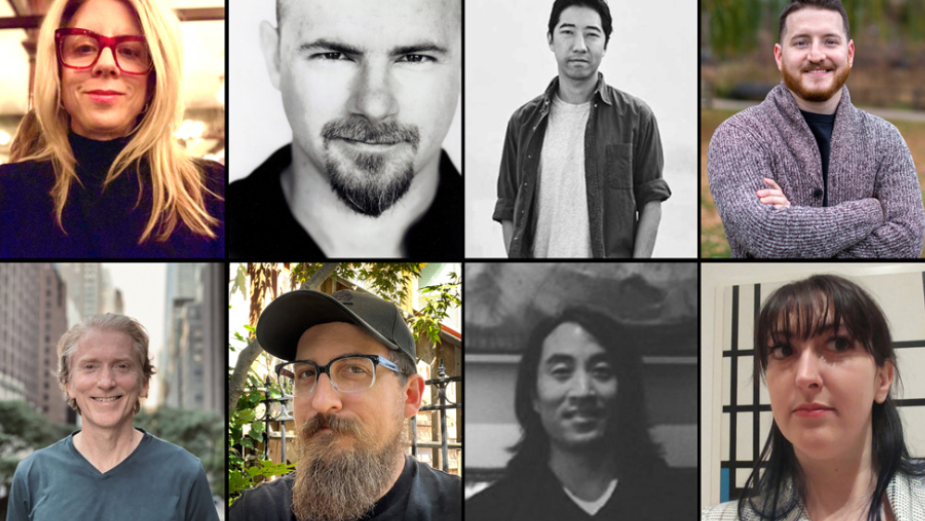 With the entry deadline for AICP’s Camp Kuleshov trailer competition approaching, the emerging creatives who are crafting  their entries now have a great resource to turn to, as Camp K has announced its lineup of Coaches available for mentoring and creative counseling.

Serving as Coaches this year are (and pictured clockwise from upper left) are Editors Jen Dean, Jay Nelson and Robert Ryang of Cut+Run, David Rubin of Cutters, and Sara Sachs and Ben Suenaga of Friendshop! Also on the coaching roster is Creative Director Rob Foster of Carbon and Partner & Sound Designer/Mix Engineer Joe O’Connell of Sonic Union.

Camp K participants interested in connecting with one of the Camp K Coaches should send an email to the ‘Camp Counselors’ at campk@aicp.com, and a coach will be assigned to assist them. A full rundown on rules, eligibility, fees and key dates can be found on the Camp K website at www.campkuleshov.org. Deadline for entries is September 23, 2022.

Camp K is designed to give emerging talent a chance to heighten their creative and craft problem-solving skills while also gaining access to invaluable mentorship opportunities. The competition challenges entrants to take existing films and re-imagine them as something new and different.

In the Editorial category, entrants must choose a film and, via a 90-second trailer, recast it as from a different genre or directed by a filmmaker with a distinctive visual or narrative style – i.e. a political thriller is transformed into a comedy. They can also choose two films from the source list and, via mashup, create a trailer for a completely new film of a different genre. In Graphics, entrants must create an opening title sequence for a movie that never had one or had a weak one, and which conveys their impression or interpretation of the film. Sound Design entrants are tasked with choosing a section of a film and creating an entirely new sound design, with their interpretation of the scene through sound design being noticeably different from the original, while still being entirely original in and of itself.

The winners of the Camp K competitions at AICP chapters across the country will be announced later this fall. These entrants then become eligible for a chance to win the Camp K grand prizes, The Lev Awards.

This year’s coaching lineup represents a mix of artists from different disciplines, and includes both veterans and newcomers to the ranks. Carbon’s Foster, a first-time Camp K Coach, says his approach will be “to nudge people in the right direction, without anyone feeling like they’re being fed the answers to the quiz. It’s always best if there’s some self-discovery along the way.” Having the coaches’ expertise and insight available to entrants, he believes, will prove highly valuable. “If I had a nickel for every time I was stumped over the last 20 years and someone was kind enough to help me out, I’d have a huge, weird pile of nickels,” he quips. “At the end of the day, no one figures everything out by themselves, and no one should feel like they have to. Experience is most useful when it’s shared with others.”

Cutters’ Rubin agrees. A Camp K winner in Editorial and a first-time Coach, he notes that “this can be a tough competition. And it's easy to get stuck halfway through a project that just isn't quite coming together. I hope people reach out if they’re stumped on where to begin, or where to go next. Whether they need to ask specific questions regarding the rules, or if they need broader advice, that’s what we're here for.”

As a former Camp K winner, Rubin knows the value of having extra sets of eyes on your work. He recalls how Cutters proved to be a genuinely supportive environment when he was a camper himself, and urges current campers to reach out to others. “I always tried to get creative feedback from other assistants and editors,” he says, “and I highly encourage any participants to show their work to their peers as well. It’s such an important part of the process.”

Sonic Union’s O’Connell has been both a Coach and a judge for Camp K in the past. He sees the Coaches as functioning like a compass: “Do your best to guide campers in the direction of their strengths, and let them handle the granular details on how to get where they’ll ultimately go,” he observes.

Camp K can prove to be a great proving ground for those whose work rises to the top, O’Connell adds, and having the Coaches at your back will be a huge boost. “Those who excel in this competition frequently go on to have successful careers in the industry,” he points out. “However, it can be easy to feel overwhelmed. All of us serving as Coaches have been where they are, and have plenty of practice getting creatively unstuck with projects. If a conversation with one of us can provide some insight and strategies to employ, then mission accomplished.”

The deadline for entering Camp K is September 23, 2022. The fee for single K entries is $65; three or more entries are $55 each; five or more entries are $45 each, with the discounts applying to either companies or individuals. Any questions entrants may have regarding rules, eligibility or anything else can be directed to campk@aicp.com, and a ‘Camp Counselor’ will reply promptly.

Supporting all Camp K competitions is Musicbed, an AICP Supporting Partner, which made selections from its production music library available to entrants and presented each Lev winner with a $1,000 prize.